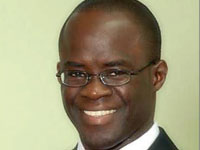 The government’s decision to cut the budgets of its departments and agencies was ill advised and demonstrates a “gross lack of understanding of basic economics,” Free National Movement (FNM) Chairman Darron Cash charged yesterday.

But Minister of State for Finance Michael Halkitis said Cash was being inconsistent in stating his position on behalf of the FNM given that his leader, Dr. Hubert Minnis, called on the government in December to “introduce austerity measures moving forward”.

In a statement yesterday, Cash questioned the government’s proposed cuts saying, “If their decision is not being driven only by their lack of appreciation of basic economics, then the basis for such proposed draconian cuts must be a general level of desperation and a willingness to be reckless in the management of the Bahamian economy in general and the public service in particular.

“No responsible government would contemplate, much less actually request that government agencies make such draconian cuts in such a short period of time. To do so further reflects a fundamental lack of understanding and appreciation of the impact such dramatic reductions would have on every level of the public service, the people within those agencies and departments, and the immediacy with which those cuts would slow or even reverse any level of economic recovery.”

The government is proposing to cut the budgets of its various departments and agencies by 25 percent in the 2014/2015 fiscal year and by 10 percent immediately, according to a letter sent out by the Ministry of Finance.

In the letter, then Financial Secretary Ehurd Cunningham said the subventions have created a fiscal burden untenable under the current economic situation.

This follows a call by international rating agencies for the government to take bold and tangible action to reduce spending and slash the deficit.

But Cash said the government is making the wrong move.

“We cannot understand what the ministers of finance are thinking, or even if they are thinking,” he said. “To cut too deeply and too soon would be a serious blow to consumer and investor confidence, and runs the risk of taking the economy back into recession.”

Cash said such a step should not be taken until the economy recovers fully.

Responding to the FNM chairman, Halkitis said, “I invite him to review the comments of the leader of the opposition as it relates to austerity measures that he made in December.

“He urged us to do austerity measures. Now here comes the chairman. They need to get their act together.”

Cash said the Christie administration should be in a position to identify specific areas in each department where money can be saved instead of making across-the-board cuts.

But Halkitis said the action won’t be across-the-board as Cash suggests. “We went through the budget and identified areas where we can save,” he explained.

“This is not just a blanket cut. This is not haphazard. This is going through each item in the budget and identifying savings where you do not diminish the level of service to the public.

“Our budget people have gone through with the various ministries and identified savings that won’t endanger critical services.”

Cash added that while the entire process is inadvisable, one of the of cuts is just plain wrong.

“The unkindest cut of all must be the unconscionable proposed cuts to the funding for The College of The Bahamas,” he said. “Given the college’s push for university status, in conjunction with its existing financial challenges, the FNM believes that these cuts would be inappropriate and ill-advised. The COB budget should be off limits.”

Cash said the government ought to reconsider that decision particlarly since the Progressive Liberal Party (PLP), in the run up to the general election declared that it would “double investment in education”.

“When the time came for them to put their money where their mouths were, their intricate web of deceit started to unravel,” Cash said.

But Halkitis has said this criticism is based on “erroneous information”.

“COB is one component of an education system,” he said when asked on Monday if the proposed budget reductions were evidence that the PLP administration is not now in a position to begin doubling the investment in education.

“We go from preschool all the way up to The College of The Bahamas and if we ask them to look at their budget to identify some savings in the subvention, theoretically we can take some of those savings and invest them in early childhood education, in special education, in building a new high school, if they can identify the savings.

“So again, I don’t think it is a drawback off the promise to double the investment in education.”

The government intends to bring its mid-year budget statement to the House of Assembly on Monday. It will be delivered by Prime Minister Perry Christie, who is also minister of finance.