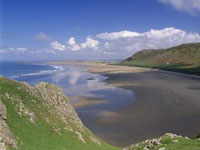 TripAdvisor users have voted Rhossili Bay in Swansea – which boasts over three miles of white sand on the Gower Peninsulaa – as the UK’s number one beach and the third best beach in Europe.

Rhossili Bay was even voted into the world’s top 10 beaches, topping beaches in both Hawaii and the Caribbean.

The number one beach in the world was Italy’s Rabbit Beach in Sicily, situated on the small island of Lampedusa. Grace Bay in Providenciales, Turks and Caicos, took the runner-up spot.