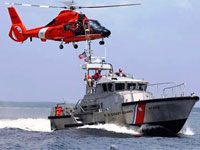 The National Emergency Management Agency (NEMA) and the United States Coast Guards Personnel are embarking on a joint mass rescue exercise to be conducted on Grand Bahama.

The mass rescue exercise known as ‘Operation Black Swan,’ will be used to test and evaluate the response strategies currently in place here in The Bahamas.

It will also be used to certify that NEMA, the Grand Bahama Disaster Consultative Committee and other disaster rescue agencies are fully prepared to respond to and execute proper plans of action in the event of a catastrophic disaster in Bahamian waters, as The Bahamas is a cruise ship destination, there are a large number of cruise ships that traverse our waters and U.S. visitors arriving on our shores.

A number of representatives from government agencies of The Bahamas and the United States of America were on hand for the luncheon and learned that the Black Swan exercise will take place on April 1 through April 5 2013.

Senator Julian Russell, who brought remarks at the luncheon yesterday at Ruby Swiss restaurant, on behalf of Minister for Grand Bahama Dr. Michael Darville said, “The government of The Bahamas is indeed pleased that an operation of this magnitude will take place on Grand Bahama, which is considered the industrial and maritime hub of The Bahamas.

“The Bahamas especially Grand Bahama, is no stranger to the devastating effects of nature disasters.

“Subsequently the government of The Bahamas, recognizes the necessities for its agencies to liaise and work collaboratively with persons from neighboring countries, to implement and enforce procedures that will increase awareness and ensure preparedness in the event of a catastrophic occurrence that requires mass rescue operations at sea or ashore.

“This luncheon allows all the key players in this exercise to meet, establish communication and be advised about the milestones in the planning process.

“I would like to express my gratitude to the organizers of this exercise for bringing together this team of highly qualified individuals from the Bahamas and the United States, whom I am certain will facilitate this mass rescue operation, response and recovery operation with little to no error.

“On behalf of the Prime minster of the commonwealth of The Bahamas Perry Gladstone Christie, the Minister of National Security Bernard Nottage, the Minister for Grand Bahama Dr. Michael Darville and my parliamentary colleagues in the upper and lower House, I wish you success in the months ahead.”

The senator noted that we can never be over prepared but we can be under prepared and Operation black Swan will help The Bahamas to not fall into a state of under preparedness.

American Embassy Acting Deputy Chief of Mission in Nassau, New Providence John Armstrong was the feature speaker for the luncheon.

In his remarks Armstrong stated, “Ladies and gentlemen, Bahamians and Americans it is a real privilege to be here today.

“We are involved in a very serious exercise which is overall preparedness.

“This exercise is the largest exercise of its type that has ever been attempted.

“This is a real opportunity both for the United States and The Bahamas because we all know preparedness is important.

“An example of this is simple whereas you do not buy fire insurance for your house expecting it to burn down but you do want to be prepared.

“In a great way that is what (Operation) Black Swan is and it shows how forward looking The Bahamas is.

“I wish to emphasize the importance of this exercise, which I state again, is the largest of its kind and is happening here in The Bahamas.

“It is not only important for the United States but the Bahamas as well because every year we (77 U.S. Embassies) are required to complete a report of potential evacuees at our embassies around the world.

“Based on our latest report we have gotten between five and a half and six million Americans that come to this country every year, which is a huge number and also one of the reasons why this exercise is important to the United States.

“I am glad that over the next few days a (number of representatives from the U.S. Coast Guard) and other agencies will be conducting a walkabout in preparation for this exercise and we are happy to work with our Bahamian partners and at the end of it all we encourage you and wish you the best of success.”