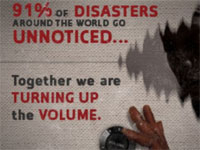 What do the United States, the Bahamas, Jamaica, Haiti, the Dominican Republic, Cuba, India, Viet Nam, Argentina, Somalia and Indonesia all have in common?

They were all hit by a flurry of natural disasters in October 2012. Our collective memory likely retains only one event: Hurricane Sandy claimed the lives 131 people and caused major damage to the East Coast of the United States.

Many people may not know that across the Caribbean, Hurricane Sandy claimed the lives of 135 people and caused equal, and in some cases, more damage than in the USA. People are even less likely to know about the tropical cyclones that also struck Asia, or may have scarcely caught a whisper of the floods in Argentina, Somalia or Indonesia during the same period.

October 2012 reflects a reality that our global village is facing. Over 90 percent of disasters around the world go unnoticed – in silence. They’re too small, inconvenient or overshadowed by other events. Without the attention of the public and the media, they often pass under the donor community’s radar.

But these disasters are not silent for the millions of people they affect. For example, around two million people – 12 percent of the population – are facing a food crisis in Malawi right now. And in Lesotho, 725,000 people – representing one-third of the country – are dealing with the same disaster.

The figures are truly alarming. The Centre for Research on the Epidemiology of Disasters reported 221 disasters in 1992 affecting 78 million people and causing economic damage estimated at 70 billion US dollars. Almost 20 years later, in 2011, these figures soared to 336 natural disasters worldwide, 209 million victims and a bill for nearly 366 billion US dollars. How many years does that add up to in terms of lost development for countries and their citizens?

In a nutshell, disasters around the world are growing in frequency, severity and cost each decade with no end in sight. With the effects of climate change, urbanization and environmental degradation, by 2015 an estimated 375 million people – a 79 percent increase from 2011 – will suffer the ravages of devastating weather events.

It is no coincidence that the European Commission Humanitarian Aid and Civil Protection, the world’s leading provider of humanitarian funds, and the International Federation of Red Cross and Red Crescent Societies, the world’s largest humanitarian network, are focusing on silent disasters today. Together we have worked in partnership for many years on the frontline of disasters of all kinds, including ones in the media spotlight and those far from it. We want to highlight how disasters – visible or invisible – are part of our daily lives today and in the future.

The problems may seem large and complicated, but the solutions are well within our means.

Even during this time of economic austerity, slashing humanitarian budgets would be tantamount to turning a blind eye to a costly reality that affects us all, and writing off the lives of the millions of families affected by disasters.

It is important to continue promoting an approach focused on adapting to the changing environment and building resilience among those most likely to feel its impact. People should not be left to the mercy of a devastating wave, a failed harvest, or a home likely to collapse at the slightest tremor.

Our role and our commitment is to build up a mindset around the world where communities – especially in disaster-prone areas – are better supported.

Families would then be able to better cope with these often predictable and recurring shocks, and recover more quickly.

We must continue to channel even more support into preventive measures and strengthen local capacities to handle crises, rather than focusing too systematically on deploying resources in the aftermath of disaster. This approach has been shown as more cost-effective and has a longer lasting impact on families, communities and governments.

The bottom line is we need to change our way of thinking and adapt in the face of this ever-present reality of more disasters and their devastating toll on people’s lives. We call on the public to be a voice for the unheard people struck by silent disasters. We can make a difference in the face of indifference.