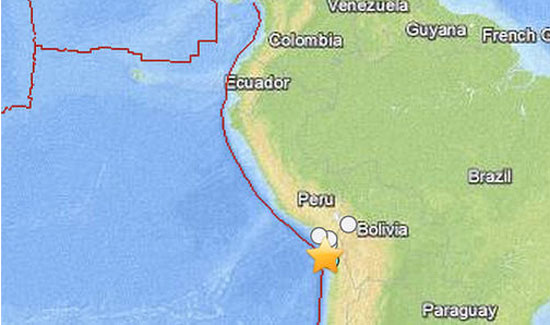 A very strong 8.2-magnitude earthquake struck off the western coast of Chile on Tuesday evening, the strongest in the hemisphere in some time, according to the United States Geological Survey.

The quake led Chile’s National Office of Emergency to issue a Tsunami Warning, requesting the evacuation of the country’s coastal areas. That alert has reportedly been extended to countries in South and Central America with Pacific coasts, including Colombia, Costa Rica and Panama.

The quake’s epicentre was 99 kilometres northwest of Iquique and 140 kilometres south-southwest of Arica, at a depth of 10 kilometres.

It struck at around 6:46 PM local time, causing light, weak and strong shaking across the country, with the strongest reports of shaking around the area of Calama. It was also felt in neighbouring countries including Peru.

The quake killed six people in Chile, while the tsunami warning was eventually lifted.

The quake came after a period that saw hundreds of earthquakes in recent months in Chile.

By the Caribbean Journal