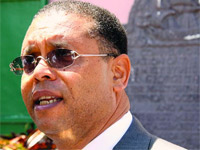 Top hotel executives, representing some of the biggest employers in the country, are “surprised and concerned” by recent pronouncements on work permits by the government.

George Markantonis, president and managing director at Atlantis, said the largest resort in The Bahamas is “very concerned”. While the issues are well known, the Paradise Island executive is surprised that such announcements are made in public without private conversations with key stakeholders that contribute heavily to the economy.

Earlier this week, Mitchell addressed Parliament extensively on the issue of work permits. He declared that the government plans to clamp down on foreign maids, housekeepers and domestic staff in the next year. In addition, he implied greater implications down the road, including a rise in the cost of work permits and restrictions for other industries.

With the $3.5 billion mega resort expected to open in December 2014, existing properties such as the Wyndham Nassau Resort & Crystal Palace Casino and the Sheraton Nassau Beach Resort have less than 10 work permits, he said. This figure compares with 1,000 total employees.

Indeed, Baha Mar will be capable, under the Heads of Agreement, to bring on up to 200 foreign workers once it enters the operational phase. The mega resort will instantly become one of the largest employers in the country with thousands of employees.

Sands said that The Bahamas, given its size, inevitably has “deficiencies” in some areas that require expatriate labor. The mix of foreign and local workers ensures brand integrity and allows the country to compete properly on the global stage.