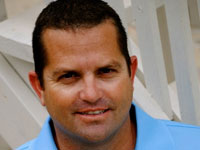 When Palm Cay officially opens its 186-slip, full service marina next month, there will be a familiar face at the helm — local yacht broker, charter CEO and fishing network CEO Brooks Russell has been named marina consultant.

Palm Cay Development announced the appointment of Russell, 38 as consultant responsible for advising and providing oversight  on the design, operation and sustainability of Palm Cay Marina, the largest marina in number of slips in New Providence.

“When we were searching for the right person who could provide everything from assistance with design and implementation of marina infrastructure to planning the kind of boating activities to create a marina that was more than a ‘parking lot’ for boats but became an important part of the lifestyle of the Palm Cay community, one name kept coming up. That name was Brooks Russell and we are delighted to announce that he has come on board as a consultant playing a key role,” said Palm Cay Development, the company behind the $200m upscale community at the eastern end of New Providence.

Russell will oversee the completion of installation of a large fuel tank and other infrastructural developments, coordinate marina activities and ensure customer satisfaction. That calendar already includes a boat show, a family fish ‘n eat fun tournament and a major fishing tournament in the next few months.

He will also drive sales and rentals of marina slips. “I am very excited about working with Palm Cay,” said Russell, who holds a B.A. in Liberal Arts from Williams Baptist College in Walnut Ridge, Arkansas. “It is like being handed a clean slate and told, ‘create a boating community around a family-oriented community that loves boating, fishing, swimming and sailing.”

Russell is part of a growing Bahamian team heading the upscale residential development of single and multi-family homes at the far eastern end of New Providence where the marina and a clubhouse will be central fixtures in the community lifestyle. When the marina is fully operational, it will be the largest in number of slips in New Providence.