Keith Parker, President of P.S. Advertising and Public Relations, organizes the competition each year, in co-operation with Sharon Ferguson, of the Ministry of Education.

Third place went to Joshua Griffin of North Eleuthera High with 283.5 points for “Sour Orange Whitefish” and 289.5 points for his “Guava Ricotta Crepes,” Leandra Albury of Inagua All Age School, was fourth with a total of 553 points. 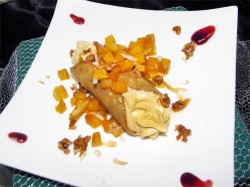