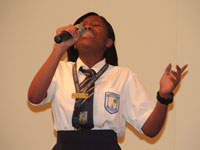 Students participating in the 2013 E. Clement Bethel National Arts Festival Adjudications on Grand Bahama say that not only are they showcasing their talents, they are also learning and having fun.

Anthony Smith, a 12th-grade student at Bishop Michael Eldon School who is performing for the second consecutive year, said that taking part in the Festival is a great experience.

“I love singing and playing the piano – basically music overall; so competing against other students and seeing how everyone else performs is great,” he said after his performance in the Pop Solo for 16-18 year-olds (Class 31), on March 7, 2013.  He had also performed the day before in the Gospel Solo for 16-18 year-olds (Class 17).  “It’s just a wonderful experience, gaining exposure and seeing what the competition is like and just showing what I have to offer.”

Janelle Thompson, a 15-year-old 10th-grade student at the same school, performed very well in the Gospel Solo for 13-15 years class (Class 15) and as a part of the Gospel singing group (13-15 years) earlier that week.  She said being in the Festival this year was an exciting time for her.

“This is the first time I participated solo and I actually won (Class 15 in the Grand Bahama adjudications) so it was really exciting,” she said.

She added that she wanted to encourage other classmates and friends to participate in the Festival next year.

“Come out and enter into as many categories as possible,” she said.   “I’m a little upset that I only entered one by myself.”

St. George’s High School 11th-grade student Lashan Cooper agreed that being in the Festival was a fulfilling experience.

“It was great feeling to have, being onstage at the National Arts Festival,” she said.

“At first I was nervous; but when I got really into my song, the nervousness just went away and that was it,”

She said that she chose the song she performed Nat King Cole’s “Unforgettable” because she wanted to perform it.

“Even though it was an old song, it was a good song for me to sing,” she said.  “It really helped to bring my score up really high.”

Eight Mile Rock High School 11th-grade student Vashti Charlton also sang a jazz standard (Peggy Lee’s “Fever”) in the Jazz Solo-Open Class (Class 35) and did well.  She said she took part in the E. Clement Bethel National Arts Festival since she was in grade seven.  However, until last year, she performed in the Dance categories.

“I am very happy to get the highest score today (in the Grand Bahama adjudications for Class 35) because it was something I worked so hard towards.”

She agreed with using an older song to perform.

“I like the feeling of the old song because it is like I am learning something about things that happened so far back and I am learning the old styles,” she said.

Bishop Michael Eldon School 11th-grader Lethea Carey performed strongly in last year’s Festival.  She said that that see enjoyed performing this year and that the competition is getting “better and better”.

“I am working harder and harder to win and it’s a great experience,” she said with a smile.  “More people from my school are performing this year and it’s fun being here with my friends.”

St. George’s High School 10th-grade student Livia Duncombe performed “My Funny Valentine” and Celine Dion’s “Think Twice” in two classes that day.  She said that she felt good and had a lot of fun in the Festival.

“It was the first time I ever sung for a competition nationally,” she said.  “It was awesome having my classmates performing, too.  They are like my family and it was good having that support there for me.”

Ms. Charlton she said that it was also good to have adjudicators from the Festival come to the island to see what the competitors have to offer.

“It brings a sense of variety – not just the judges from Freeport – and that way we get a more impartial score on our abilities,” she said.

“I would encourage any of my schoolmates to enter it next year,” Ms. Charlton added.  “Try it because it encourages you.”

The E. Clement Bethel National Arts Festival Adjudications continue in Grand Bahama until March 15, at the Grand Lucayan Convention Centre and the event is free and open to the public. 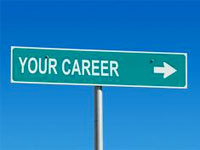