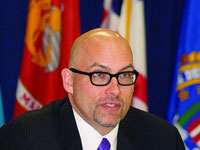 The U.S. Embassy in Nassau has transitioned to a new web-based visa appointment system that will affect all non-immigrant visa applications throughout The Bahamas and the Turks and Caicos Islands, Acting Charge d’Affaires John Armstrong announced yesterday.

He said it is expected to simplify the visa application process. Armstrong was speaking during a press conference at the U.S. Embassy.

The web-based system allows applicants to fill out the DS160 application form online at no charge, he said. With the new system, applicants will no longer have to wait on those long lines at the embassy on Queen Street to pay for the visa. They can now pay at any Cash N’ Go location on New Providence, Grand Bahama, Abaco and Exuma. The embassy is also doing away with those scratch cards previously needed to set up an interview appointment. That can now also be done online, the U.S. official said.

Armstrong said people will no longer have that narrow time frame for passport pickup as a courier will deliver passports to a DHL office in Nassau or Freeport. He said this will save Bahamian applicants a lot of time.

“When you were waiting here one of the things that you had to wait for was to pay at the cashier. Now when you come to the embassy you’ve already paid long before, so there’s no line to the cashier anymore. Another thing with the scratch card, my understanding is once in a rare while all the lines to the call center would be busy so now you’re at your leisure doing it on the Internet setting up your own appointment. You can do it whenever you want,” Armstrong said.

The U.S. Embassy is also looking to make things a little easier for Family Islanders. By the summer, it hopes to have a web-based payment feature that would allow applicants to pay for their visas by credit card, as Cash N’ Go is not on every island. Until then, Armstrong said Family Island residents have limited options and will still have to travel to New Providence for the appointment, as is required by law.

On average the U.S. Embassy processes about 20,000 visa applications a year. Many of them are for Bahamian students going to college in the United States.