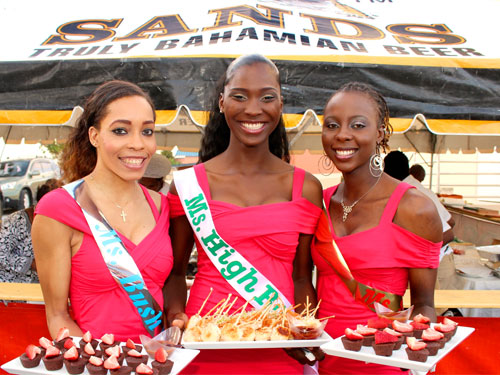 The Bahamian Brewery and Beverage Company extended its country-wide distribution footprint with the opening of a new warehouse, wholesale distribution and retail and office complex in the nation’s capital on Nassau Street on April 18th.

The 100% owned and operated Bahamian brewery hosted an evening celebratory event for 300 + people, the numbers reflective of the 60+ years of community connectivity the family owned business has built up since its inception by James ‘Jimmy’ Sands’ father, Everette Sands. 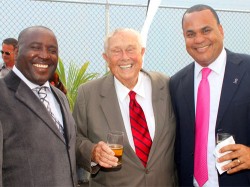 Following the blessing by the Dean of Christchurch Cathedral the Right Reverend Patrick L. Adderley, and a warm welcome from both James Sands and his wife Plait Lady Claire Sands, the Minister of State in the Ministry of Finance Honourable Michael Halkitis gave remarks. The Minister said that in 2007 Freeport welcomed the completed 60,000 square foot Bahamian Brewery on Queen’s Highway employing 75 Bahamians and now five years later, further resources have been invested in Nassau with the opening of a $1.6 million facility on Nassau Street employing 20 Bahamians.  He said he applauded their pioneering spirit, their belief in the Bahamian economy and in their fellow man.

He continued:  “The Sands family business is an excellent example for all Bahamians as to the possibilities that exist today for local investment.  I applaud their hard work and focus and hope their progress and ongoing success is an incentive for other Bahamians.”

With his father, wife and four children beside him, (two of whom are already working in the business,) James ‘Jimmy’ Sands said that without a doubt it was his family and the loyal, committed staff, ‘that makes the business tick.’

“I could not do this without the help and support of the people who work with me in this business, several of them over many years – it’s what makes it tick!” said the CEO.  “I am very blessed that I have solid, loyal and committed Bahamian staff.”

Mr. Sands said that his father, Everette Sands, passed on the liquor and beverage industry legacy which the family was proud to advance with the development of their first brewery in 2007, an investment to date of $18 million dollars and the creation of the Sands Beer and other liquor and beverage lines.

“We also now have seven Jimmy’s Wines & Spirits stores in Nassau, Freeport and Eleuthera, all owned and operated independently by Bahamians, and more to come.”  He added that sales were increasing across the board, driven by brands that each holds a different customer appeal.

“Our on tap draft beer has added another dimension to the Sands beer line and the Strong Back Stout, High Rock Lager and Bush Crack speciality beer are immensely popular; we expect the same success with our high energy malt drink, Triple B.”  As a major sponsor of the recent CARIFTA 2013 games the company gave 6-packs of the vitamin-rich Triple B malt beverage for all participating athletes.

To applause and whistles from the guests, James Sands made the announcement that within two months the Sands Beer line will be available for export to Florida.

“I’ve been working on this project for some time and I can’t say it’s been easy but I am pleased to say that within two month’s time, we will have our first exports to the US market from Bahamian Brewery, quite an achievement for an all-Bahamian company to penetrate the US market.” Sands Beer has the tag line, ‘truly Bahamian Beer,’ which is expected to attract sales overseas, as it does here.

Government guests included the Honourable Dr. Daniel Johnson Minister of Sport and Culture, The Honourable Khaalis Rolle Minister of State for Investments, Honourable Hubert Minnis, MP and Leader of the Opposition, and Dr. Andre Rollins Member of Parliament for Fort Charlotte.  Guests represented a cross section of the local business community including hospitality, food and beverage, corporate and small business owners, and the professional services.  Award winning chef and owner of Savoury Art Ron Johnson catered the event with guest service by models from the Brown Entertainment Group.  Master of Ceremonies was the comedic David Wallace and the music by the Royal