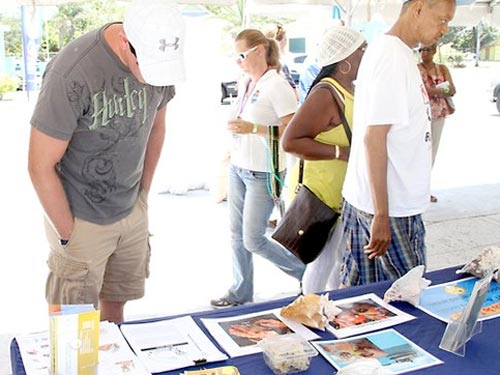 With studies showing the country’s conch stocks are on the decline, the Bahamas National Trust hosted a “conchservation” event as part of its campaign to raise awareness of the need to better manage the conch-fishing industry.

Noting that millions of the aquatic sea-slugs are caught yearly for consumption, BNT President Neil McKinney explained the conch population is now “skewed towards the juveniles” and catching that group would mean taking them before they get a chance to reach reproductive age.

Stressing the BNT is not advocating for a ban on conch or a closed season, Mr McKinney said he just wants to get the word out to Bahamians that the country is in need of a “strategy” on how to maintain the conch population.

“What we’re trying to do is to raise awareness about the stocks and the populations of the conch that we have here in the Bahamas,” he said, speaking at the event, hosted by Frankie Gone Bananas at Arawak Cay.

“Today, what we want to do is to start the dialogue and raise the awareness about how we’re going to change the way we manage our conch stocks, because that’s the only way we’re going to be able to maintain stocks or increase stocks – if we change what we’re doing and we change the practice that we have.”

What the BNT wants to do, Mr McKinney said, is talk to fishermen, restaurants, and the public in general, to “give them the facts.”

“Explain to them the biology of the conch, how they breed, how they reproduce, how long it takes for them to become mature. And then, let’s sit down and have a strategy on how we’re going save them in the sense that we’re going to maintain the population that we have,” he said.

“Hopefully to grow it back because there’s a very high percentage right now, biologically speaking, the population is skewed towards the juveniles which means that we’re taking them before they get a chance to reach reproductive stages.”

When asked how many pounds of conch are actually fished out of the sea per year for consumption, the BNT president said, “millions.”

“I’ll give you a couple of statistics that I know,” Mr McKinney said. “The Department of Marine Resource says that annually we export 500 to 600 pounds of conch. If you figure a conch weighs a half a pound – that’s over a million conch that we’re exporting.

“I’m told that that amount that we export is around 20 per cent of the annual take, so if you run the math on that, it’s significant.”

Environment Minister Kenred Dorsett was also present at the event where he told The Tribune the country has to work towards “nourishing those areas” where conch stocks are depleted.

“Conch is a part of our almost daily experience,” he said. “It’s a part of our diet and it provides economic opportunities for those who fish for the resources and bring it in for us to enjoy. To ensure that that maintains itself and is sustained over a long period of time, we have to understand the science involved in ensuring that those resources are available to us for generations unborn.

“We are going to have to start having national conversation about food security. I think we have to understand that there is a reason why we talk about getting conch at a particular size – ensuring they are mature when you get them, because we want to make sure they are able to have conchs for generations to come.