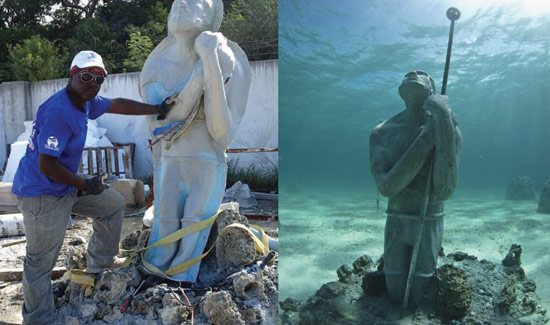 BREEF’s Sir Nicholas Nuttall Coral Reef Sculpture Garden installed off the western coastline of New Providence Island in The Bahamas earlier this month is receiving international attention from scores of on-line journals and news outlets around the world.

“We are excited by the recognition our project, and by extension The Bahamas, is attracting around the world,” said Casuarina McKinney-Lambert, BREEF’s executive director.

The “Daily Mail” which boasts average daily circulation of over 1.7 million copies, carried the headline “Weight of the ocean on her shoulders! 18ft Atlas sculpture dropped off coast of the Bahamas to form incredible underwater art garden” in its October 15, 2014 print and on-line issue. The article was referring to the centerpiece sculpture – Bahamian Ocean Atlas – a 60 ton and over 17 feet tall sculpture modelled on a young Bahamian girl by international sculptor, dive instructor and conservationist Jason deCaires Taylor.

The lifestyle section of Forbes magazine has also highlighted BREEF’s marine conservation project. In the article, centerpiece sculptor Jason Taylor noted that “the aim was to show the vital role the local community and especially the younger generation have in conserving the islands’ natural resources”.

“Some US visitors I met are already planning their return trip to The Bahamas to see how the sculptures – pieces of living art- change over time as corals and other marine life make the new reefs their home,” noted McKinney-Lambert.

The BREEF Sir Nicholas Nuttall Coral Reef Sculpture Garden highlights the global need for marine conservation, while encouraging each of us to do our part locally. “The Ocean Atlas piece is our call-to-action. We want our country to be known around the world for its beautiful and healthy marine environment and there is still a lot of work be done.”