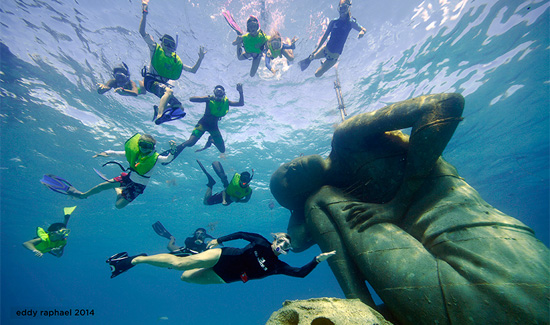 “It is an absolute must that we have more coral reefs included within the Bahamian network of marine protected areas,” said BREEF’s executive director Casuarina McKinney-Lambert. “We need to further ensure that these areas are accessible for the majority of Bahamians to enjoy.”

For more than 20 years BREEF and its partners have been recommending that the waters off the western tip of New Providence be designated for marine protection.

Recently, the waters have been the spotlight of both local and international attention as three coral reef sculptures and over 60 reef balls have been deployed there in what some call an “underwater classroom”.

However, BREEF is seriously concerned that although the Bahamas has a third of the reefs in the Caribbean, there are currently no reefs around New Providence that fall within protected areas: BREEF wants this changed.

McKinney-Lambert noted her concern over oil spills around the Clifton Pier area. “These areas are critical for locals and visitors, and need proper management and clean up,” said BREEF’s executive director.

It is estimated that around 75% of the world’s coral reefs are threatened or degraded. The use of fossil fuels resulting in oil pollution and climate change are some of the serious threats to coral reefs that BREEF is concerned about.

This week, the U.N. Intergovernmental Panel on Climate Change (IPCC) issued their starkest warning yet: “If left unchecked, climate change will increase the likelihood of severe, pervasive and irreversible impacts for people and ecosystems,”. BREEF’s funding from the UN Global Environment Facility is intended to make this site a great platform for education and action about climate change and the threat that it poses to reefs and our livelihood.

Veteran science educator and BREEF Outreach Manager Marcia Musgrove said that “she is excited for people to see this living classroom near Clifton Heritage Park that includes the world’s “largest artificial reef sculpture”. Musgrove further noted, “As a high school teacher, I took hundreds of students into the sea because experience is still the best teacher.  It’s our birthright to be able to appreciate what a healthy marine environment looks like.”