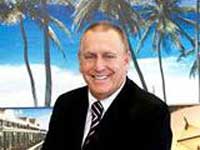 Harlequin was recently in the news when its owner, British businessman Dave Ames was accused of bribing the prime minister of St Vincent and the Grenadines (SVG) in order to gain citizenship.

According to the Basildon Reporter newspaper, Ames, 60, rejected the accusations that he had offered Prime Minister Dr Ralph Gonsalves a “suitcase of money” in return for citizenship in SVG, where Harlequin is developing a luxury resort.

Ames, who has in fact been granted St Vincent citizenship, has faced accusations in the Caribbean and at home about the firm, which has sold 6,000 vacation homes and villas since 2005, but has only built 300.

Harlequin Property has taken an estimated £300 million (US$453 million) in deposits and some investors are worried whether their homes will ever be built or if they will be able to get their money back, the newspaper reported.

The BBC sent reporters to the Caribbean and later accused Gonsalves of accepting a suitcase of money from Ames in order to receive his citizenship.

Meanwhile, Harlequin has moved out of its offices in Barbados, and the majority of its senior managers have reportedly packed up and left.

In a statement from its British office, Harlequin said it was in the process of restructuring elements of its business.