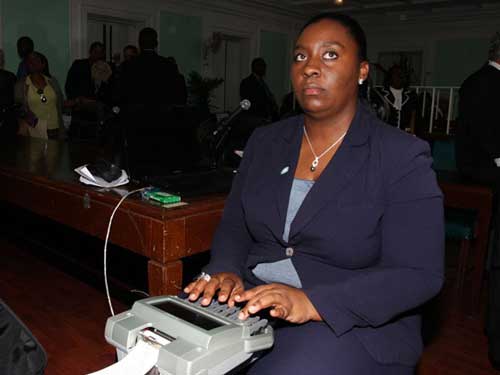 Court reporters are complaining that they are overworked and understaffed.

In spite of the welcomed change in leadership of the unit with the appointment of Enith Darling, reporters say they are faced with the same problems that existed under Ludell Theophilus, who headed the unit since 1999.

Reporters believe that there will be no meaningful change in efficiency at the unit unless more reporters are hired and digital recorders or real-time reporting is introduced.

Back in 2004, a report by the Court Reporting Review Committee, which was commissioned by the Office of the Attorney General, found “perennial problems with the production of transcripts”.

The 2004 report suggested that the government should take over management of the unit and end the dual system which fostered tensions between the contracted workers and their counterparts in the public service. The report found that the contracted reporters are able to negotiate a better salary than that offered by the public service. During her speech at the opening of the legal year on January 9, Attorney General Allyson Maynard-Gibson confirmed a Guardian exclusive about the introduction of digital recording in partnership with the Inter-American Development Bank. Maynard-Gibson said, “We hope that by the end of 2014, all of our courts will be equipped for digital recording.

“We believe that the most efficient justice system in the region will require both court reporters and digital recording, if we are to remain on the proverbial cutting edge.”

Digital recorders were tested during a murder trial in the Supreme Court last November. Maynard- Gibson also spoke of plans to establish a career path for the unit – another recommendation in the 2004 report – in the next budget.

Today there are 32 reporters in New Providence; 18 of them work for Theophilus and 14 are employed by the public service. Of the six reporters in Grand Bahama, half of them are contracted workers. The committee found that the unit has a “number of anomalies and management problems”. It also found that there is little in-house training. Court reporting was first introduced to The Bahamas in 1989 by Czerenda Court Reporting Service (CCRS), which was owned by American Randal Czerenda. CCRS continued to provide the service until 1999 when the contract was awarded to Theophilus.