Pandemonium owner and captain, Kim Kuhnle said of the win, “We had an absolute ball! In all my years of marlin fishing, this is the first time we caught and released three blues in one day. Considering that no one on our team is under 56 years of age made it even more rewarding.” All four of Pandemonium’s blue marlin were caught on lures. Kuhnle went on to say, “My 1990, 61’ Buddy Davis is certainly not the newest boat in the fleet which shows that the older boats still raise fish.”

Top Tournament Angler honors went to Sandy Roberts who will receive a Carey Chen print presented by International Special Risks, Smith-Merritt and Travelers. Roberts now has 1,800 points toward the newly created Jim Lambert Memorial Trophy that will be presented to the BBC’s top 2013 angler at the 40th Anniversary celebration during the Marsh Harbour Championship. 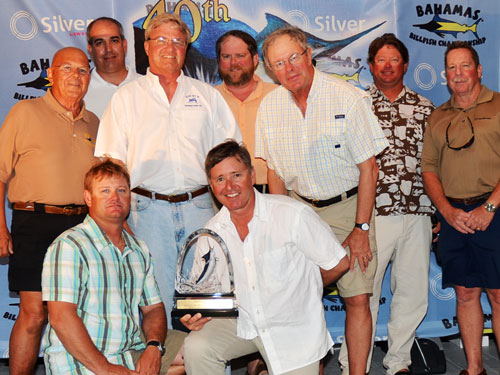 Hatteras and MarineMax were the hosting sponsors of the BBC’s season opener at Guana Cay. The companies’ sponsorship included a special ‘Pig Roast’ dinner on Tuesday evening at Nipper’s. Other social function during the tournament were hosted by CAT Marine Power, Ocean Club at Port Canaveral and Aqualuma Lighting.

Now celebrating its 40th anniversary, the Bahamas Billfish Championship is the oldest billfish tournament series in the world. Anglers can fish any or all of the tournaments with cumulative points determining the overall Bahamas Billfish Champions. The BBC endowed two scholarships that enable Bahamian students the opportunity to pursue a degree in marine biology or advanced education in the marine technologies.

For the very latest tournament information, results, overall standings or to register for any of the remaining tournaments, visit our website at www.bahamasbillfish.com. Or contact the Bahamas Billfish Championship at 866-920-5577 or e-mail: info@bahamasbillfish.com. Be sure to download the new BBC App for your Android or Apple device.