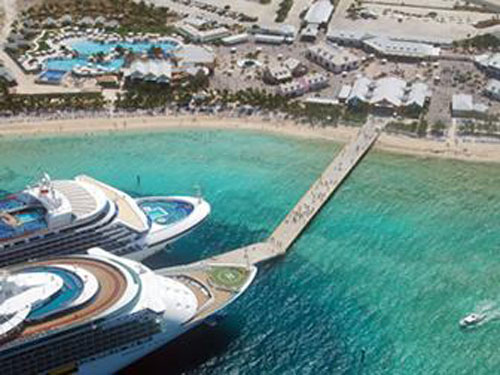 The Turks and Caicos Islands (TCI) economy has lost millions of dollars in economic activity as a result of the recent outbreak of gastroenteritis at the Grand Turk cruise port, which is owned by the Carnival Corporation.

Almost three weeks have elapsed since cruise ships discontinued berthing at the facility for fear of passengers disembarking on the island contracting the virus. The outbreak also appears to be spreading to the rest of the island, as more residents are reportedly coming down with the sickness.

The health department and tourist board have issued press releases describing their efforts in attempting to isolate and contain the outbreak. One possible source of the outbreak is thought to be in the water supply; however, this theory has not been proven as public health authorities wait on test results.

Problems with the sewage system at the cruise port are another possible cause and sources on Grand Turk report that a recently commenced excavation of the sewage system has been covered by temporary posts and plastic cloth. Security guards are posted, keeping locals from coming close to the site.

What appears to have happened is that gray water effluent is being contaminated by the sewage system.

The latest estimate for completion of the repairs and sanitization is another seven to ten days. It is understood that Carnival executives will be arriving this week to meet with Premier Rufus Ewing and be interviewed on a Radio Turks and Caicos broadcast.

One concerned resident of Grand Turk said that the situation on that island is worsening as cruise ships were the only thing that kept the island advancing, noting that it would be a big setback for Grand Turk if the situation persists.

Carnival Corporation has been plagued with a number of unfortunate incidents over the past two years. In December 2011, the Costa Concordia capsized in the Mediterranean, while just a few months ago an engine failure resulted in one its cruise ships losing all power in the Gulf of Mexico.

Carnival has a number of ports of call throughout the Caribbean and is developing attractions in neighbouring Dominican Republic; however, the Grand Turk cruise centre has enjoyed a steady increase over the years since its opening in 2004.

The TCI government relies on Carnival’s head tax to help meet its budgetary obligations with over $3 million in annual receipts coming from arriving passengers. It is estimated that the economic impact for Grand Turk is some $250,000 per day in activity.