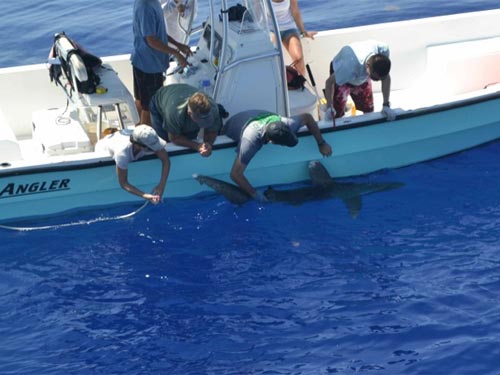 From May 7 until June 15, Stony Brook University’s Institute for Ocean Conservation Science School of Marine and Atmospheric Science and the Cape Eleuthera Institute are tracking the movements of three species of endangered sharks and sawfish (a close relative of sharks) in the central and northern Bahamas.

Students from the Bahamas Environmental Steward Scholars (BESS) program and C.V. Bethel Magnet Marine Science Program — are participating in parts of the research and education program being conducted in collaboration with BREEF and sponsored by the Moore Bahamas Foundation, an affiliate of the Moore Charitable Foundation. The Foundation has quietly funded many local causes over the decades quietly and behind the scenes. Now, in an effort to bring heightened awareness to the need for environmental management of land and marine resources, its funding is becoming more public.

“Being part of this shark research expedition was unbelievable and breath-taking,” said Courtemanche. “The hands-on experience tagging and tracking oceanic whitetip sharks really allowed me to experience the tremendous power and beauty of these creatures.”

Roberts agrees.    “As a BREEF intern, I have already participated in education and research activities on several islands and I am super excited about joining the shark research team,” she said as the program kicked off a week ago.

“It is fantastic that these young Bahamians are getting to see how abundant sharks are in their own backyard and that they have very little to fear from them,” said Dr. Demian Chapman, the expedition’s chief scientist. “It is essential that their generation builds on the progressive policies that have made The Bahamas a world leader in shark conservation”.

On Tuesday, May 21 the expedition team in collaboration with BREEF will host a Shark Education Day at Stuart Cove and the Southwestern New Providence Reef, for students in the C.V. Bethel Magnet Marine Science programme. During their stay in Nassau, Dr. Chapman and his team will also visit several schools to educate students about the research expedition and how important these powerful predators are for maintaining healthy marine ecosystems in The Bahamas.

Most studies indicate that shark populations are in severe decline throughout the region, largely due to the practice of shark finning for soup, say scientists. In 2011, the Bahamas enacted legislation prohibiting the commercial trade of sharks, shark parts and products in the country. In addition to ridding the ocean of sick and unhealthy fish, and helping to maintain balanced food chains, sharks attract millions of dollars in tourism revenue in The Bahamas with visitors from all over the world coming to dive with them.

The general public can also tune in to interviews on 102.9 Island FM’s Morning Boil on Wednesday, 22nd May, Bahamas@Sunrise on Friday, 24th May or follow the Shark Research Expedition on www.somas.stonybrook.edu/research/highlights/Chapman/index.html