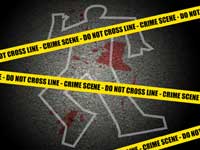 A gang of five masked gunman murdered a teenager and a man while leaving five others critically wounded during a holiday weekend shooting rampage.

The chaotic shooting was capped off with a police chase, a gunfight, and a car crash in Nassau Village.

Police have reportedly arrested two of the five suspects, supposedly members of the Fire N Theft gang. According to reports, police also seized an AK-47 rifle and a M-4 machine gun used by the murderers.

Assistant Commissioner of Police Anthony Ferguson stated that it was too early in the investigation to say what motivated the shootings.

This shooting, along with the discovery of a body in the bushes off Marshall Road, two other shootouts, and a stabbing incident are currently under investigation by the police over a crime-filled holiday weekend that raised the country’s murder rate to approximately 44 in only five months.