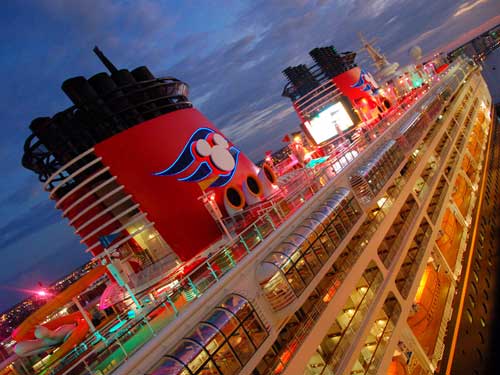 Shocking footage of the moment a Disney Cruise Line (DCL) restaurant worker allegedly molesting an 11-year-old passenger in a ship elevator has been released.

Milton Braganza, 33, from Goa, India, allegedly fondled the girl’s breasts and forced her to kiss him shortly after she boarded the Disney Dream ship on 5 August with her grandmother and sister at Port Canaveral, Florida.

The trio were looking forward to a five-night journey to the Bahamas. But the girl told her grandmother about the assault and, minutes later, they were seen approaching the customer service desk to report the crime.

But the incident was not immediately reported to police in Port Canaveral, so the man was allowed to stay on the ship as it set sail.

According to the Daily Mail, a cruise security report describes how the man “grabbed her breast, groped her and then kissed her, putting ‘mouth on mouth’.”

The newspaper adds that security officers began investigating the incident at 3.22pm and, at 4.40pm, the dining room manager reviewed the video and identified the man as Mr Braganza.

Authorities in the US are complaining they were not immediately informed. As the incident occurred within 1,000ft from shore, police in Port Canaveral could have questioned the suspect, and apprehended him if warranted.

Braganza was asked to report to the ship’s security at 7.50pm on 5 August, and police were not informed until 6 August.

Mr Braganza was then questioned by police on 7 August in Nassau, in the Bahamas, where officers assumed jurisdiction of the investigation because the Disney Dream is flagged in the Bahamas.

According to Click Orlando, in a statement to Bahamaas Police, Mr Braganza admitted: “I touched her on her right breast with my left hand.”

However, two days into the five-day cruise, the victim’s grandmother did not want the crime investigated any further.

Port Canaveral police chief Joseph Hellebrand says his department was prevented from investigating the incident in Florida because DCL did not report the crime soon enough.

But, according to Click Orlando, a DCL spokeswoman told Local 6 it “took proper action” in handling the case, and say they did not know a crime occurred until the ship had left port.

Bahamian authorities eventually let the man go and, according to the Daily Mail, Disney paid for his air fare back to India.

Pregnant? You May Not Be Able To Cruise