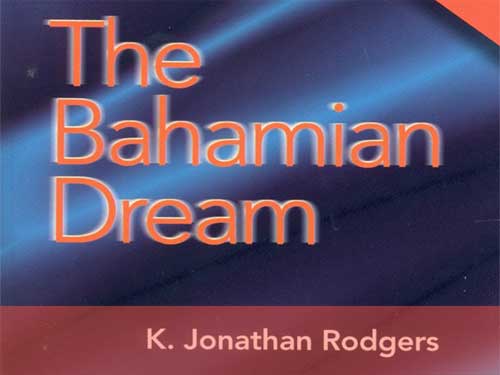 Dr Jonathan Rodgers, well known Bahamian ophthalmologist, will launch his second publication The Bahamian Dream on Friday, May 31 at Doongalik Studios at 6pm.

Media Enterprises who were the publishers of this second edition, stated: “Dr. Jonathan Rodgers offers a long overdue introspective look at critical aspects of the Bahamian economy and society. Dr. Rodgers makes the case that, if we continue along the same socioeconomic path of our forefathers, we can only therefore reasonably expect outcomes similar to those achieved in the past. Therefore, we must recalibrate (and in many cases…radically so) in order to remain relevant and sustainable in the new world order.

“Central to our economic recalibration is the necessity to: challenge the status quo, think outside of the box, and have the courage to implement change. To this end, Dr. Rodgers identifies what he sees are the core problems facing The Bahamas today – the pervasive degree of foreign ownership; an under-developed and un-diversified economy, and a weakness in human, institutional, financial and social capital.  ”To solve these problems, the author argues for a new fiscal plan which will focus on a reduction and restructuring of the national debt in the short and long term, tax reform, an in-depth analysis and reform of the educational system, a new land reform policy, an alternative energy plan, and the introduction of a national food security programme.”

This second publication is a continuation of some of the issues discussed in Dr Rodgers’ first book, Is it really better in The Bahamas for Bahamians? which was published in 2009 and came about as a result of his long standing interest in economic and social development. His aim in this edition is to disseminate this knowledge in order to provide the opportunity for the empowerment of all Bahamians. By bringing greater public awareness to the crises which the country faces whilst offering commonsense workable solutions, hopefully these suggestions will be considered for implementation, not only through government policies but also with the assistance of the general public. In other words we, the people, have to become greater stakeholders in our future.

Pam Burnside, Manager of Doongalik Studios, stated: “We are pleased to present another Book Launch at the Gallery, especially since this publication deals with such an important topic which affects us all. We cannot begin to find solutions to a problem until we are willing to first identify and acknowledge it without fear, and then work on developing practical and realistic ways to tackle it. I congratulate Dr Rodgers on bringing these issues to the forefront – there are some hard and serious decisions to be made.”

Dr Rodgers will have a discussion about several topics in the book and also be available to sign copies that evening.