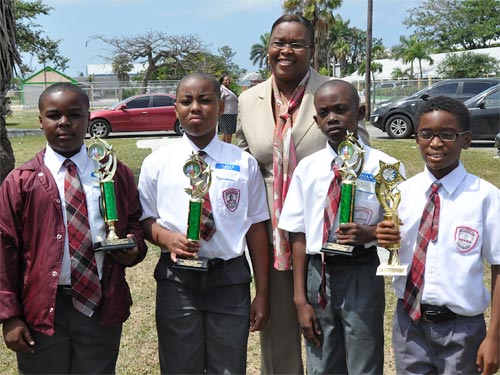 For the second consecutive year, Garvin Tynes Primary School won the Primary ”Science Talk” Competition. The competition is an initiative introduced by the Primary Science Unit of the Department of Education.

“Science Talk” is a carefully structured activity that gives students opportunities to engage in discussion as they work in small groups. The objective is to strengthen verbal communication as students engage in activities involving the understanding of the nature and practice of science. The all boys team of Tremaine Johnson, Jeremy Ferguson, Ehdrin Seide and Dyllan Maynard worked separately and in unison to develop cohesive, accurate and relevant responses to topics in Life, Earth and Physical Science.

Minister of Education, Science and Technology, the Honourable Jerome Fitzgerald attended the competition and said that he was very pleased with the enthusiasm of the participants. In addition, the Minister stated that he was impressed with students’ knowledge of science. He noted that the efforts of the organizers show that good things are happening in the area of science in education to foster creative thinking.

After the completion of one individual and three group rounds of competition the winners emerged. Trophies were awarded first, to all of the District winners and participants and then to the winners of the Final Competition.  Mangrove Bush Primary School was fourth; Cleveland Eneas was third; T.G. Glover Primary School took second place and Garvin Tynes Primary School won with a total of 66 points.

The four nine-year-olds, Tremaine, Jeremy, Ehdrin and Dyllan all agreed that studying long hours and working together is the reason they won the competition. Ehdrin added that winning the competition was the best experience of his life. Dyllan thanked Mrs. Curry, the Science Coordinator at Garvin Tynes Primary School for working with them after school. Mrs. Curry expressed her pleasure at winning “Science Talk” two years in a row and made it clear that they have a great team of teachers and students at the school.

Mrs. Barbara Dorsett, Senior Education Officer for Primary Science disclosed that twenty schools participated in the overall competition. She stated that one goal for next year is to implement “Science Talk” Workshops for the Family Island Districts to encourage greater participation. Mrs. Dorsett mentioned that the Best Speaker Award was introduced in this year’s competition at the district level. One student from each district was awarded a trophy. The award is given to encourage outstanding oral communication.

“While we want our students to be knowledgeable, we want the information to be delivered clearly and confidently, making correct use of grammar and pronunciation of words,” said Mrs. Dorsett.