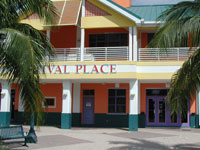 Minister of Tourism Obie Wilchcombe said yesterday his ministry is worried over reports of prostitution of boys, drug dealing and solicitation in the tourist hub Festival Place.

Wilchcombe said he feared that the reports of illicit activities, coupled with the recent murder of an American man in New Providence, would damage the country’s reputation.

“It’s something that has me troubled because that’s not what we’re supposed to be all about. Desperation sometimes necessitates [drastic measures] but that doesn’t make sense.”

He said the reported incidents point to deterioration of morale and social values.

However, Superintendent Ashton Greenslade, head of the Central Police Station, said he could not confirm the reports.

“We haven’t been able to prove that,” he said when told about Wilchcombe’s statement.

Wilchcombe also hit out at Opposition Leader Dr. Hubert Minnis for his recent comments on crime and accused him of waffling on the hot-button issue.

On Monday, Minnis said the government is paralyzed in its fight against crime. “When you cannot protect your own guests, that’s a problem,” he said.

“They said they’re the solution to crime, but in spite of all their energy and drive, they’ve not demonstrated it.”

Wilchcombe said Minnis was a government minister when the former administration dismantled the Tourism Police Unit, a move he thinks has hindered crime prevention.

He said crime did not happen overnight and Minnis should have taken a tough stance when he was a Cabinet minister.

“It would have by now manifested into what it was supposed to have been,” said Wilchcombe, referring to the unit.

“But they stopped it and they have to re-engineer something else with the Royal Bahamas Police Force but we had a force out there intending to protect the hotspots of tourism and the places where the guests [go].

“What we’re seeing right now is that many areas are not being properly managed in terms of security because obviously there are limitations…So we were augmenting it through the Ministry of Tourism.

“So when that decision was made (to dismantle the unit) it was a bad decision.”

Still, he said it is time for politicians to stop pointing fingers over the issue.

“We do not miss the fact that we are responsible right now; we are the government,” Wilchcombe said.

“We take our responsibility seriously, but it’s high time the politicians learn to be more mature in handling situations and the leader of the opposition needs to stop flip-flopping all over the place.”

Kyle Bruner, 34, of Chicago, Illinois, was shot dead during an armed robbery around 4:30 a.m. on Sunday.

Police said Bruner was trying to defend a female friend who was being robbed on Mackey Street near East Bay Street.

Wilchcombe said the victim’s father said he does not blame the country for his son’s death, but was hoping quick arrests will bring the family some comfort.

He said ministry officials are monitoring the spread of the story and plan to mount an international and domestic campaign to stem any fallout.

Police have arrested a teenager in connection to the killing.