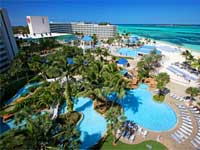 A Sheraton in the Bahamas may be liable to a guest who was lounging by the beach when a huge waterslide blew over and crashed on top of her, a federal judge ruled.

Paige Peabody Yager and her husband, Jeffrey Yager, of Bala Cynwyd, Pa., visited the Sheraton Nassau Beach Resort in the Bahamas in April 2011.

Peabody Yager was allegedly seated on a chaise lounge on the hotel’s beach when an inflatable Aqua Marine waterslide weighing several hundred pounds blew over and crashed on top of her.

The couple sued the resort and its owner and operator, Baha Mar Properties Ltd., a Bahamian company; as well as Starwood Hotels and Resorts Worldwide Inc., a Maryland corporation that operates the Sheraton.

Though Starwood has a registered corporate agent in Harrisburg, Pa., it claimed that the Yagers’ suit should be dismissed from the Eastern District of Pennsylvania under the doctrine of forum non conveniens. Sheraton also moved for dismissal on the same basis.

Senior U.S. District Judge R. Barclay Surrick denied both motions June 3, refusing to let the companies pin the blame on Aqua Marine, which is not a party to the action.

“There is little doubt that the collapse of the waterslide was the direct cause of the injuries sustained by Mrs. Yager,” Surrick wrote. “However, part of plaintiffs’ allegations relate to the duty that defendants, as the owners and operators of a hotel, owe to an invitee, such as Mrs. Yager. This is a separate inquiry from whether or not the owner and operator of the waterslide was negligent. While it may be inconvenient for defendants to pursue an indemnity or contribution action in the Bahamas, it is certainly not unduly burdensome for defendants to bring a separate lawsuit against Aqua Marine in the Bahamas.”

Sheraton and Starwood also did not present the Bahamas as a better venue by harping on the need for a “scientific examination” and view of the slide by the jury, according to the ruling.

“Defendants fail to indicate why they may not conduct a ‘scientific examination,’ and present those findings at a trial here in Philadelphia,” Surrick wrote. “Moreover, defendants’ suggestion that a jury view of the waterslide may be appropriate in this case is particularly misguided since there is no right to a jury trial under Bahamian law. In any event, the waterslide and accident scene can be adequately described and presented at trial through photographs, diagrams, and testimony.”

The inconvenience of a few witnesses located in the Bahamas, such as eyewitnesses and medical professionals, does not warrant dismissal, the judgment states.

“While these individuals may be able to provide testimony as to the treatment administered immediately following the incident, Mrs. Yager received the vast majority of her treatment from medical professionals located in the Philadelphia area,” Surrick wrote. “Their testimony will be particularly important to establish the nature and extent of Mrs. Yager’s injuries, an important factor in determining damages. We also note that even if the testimony of the physicians in the Bahamas is needed, this type of expert medical testimony can be offered through video depositions.”

Starwood operates 1,146 hotels in nearly 100 countries, employing 171,000 at the properties it owns and manages, according to its website. It is expected to earn approximately $1.120 billion to $1.145 billion in 2013, according to last quarter’s financial results.