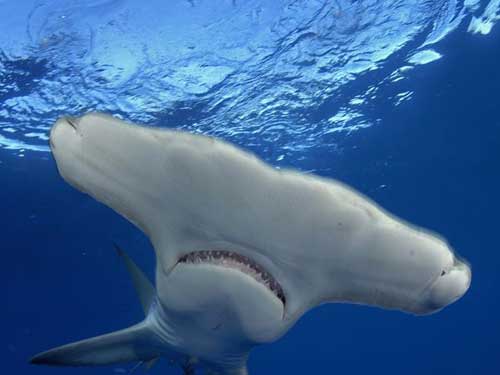 The endangered and elusive Great Hammerheads — the second largest predatory shark in the ocean — will be returning to the sand banks off the tiny Bahamas out-island of Bimini starting in January.

The historic Bimini Big Game Club Resort and Marina today announced it is partnering with Shark Diver to offer visitors The Great Hammerheads dive encounters from January through April 2014.

Bimini is one of the best places in the world where divers can encounter the fabled Sphyrna mokarran, a species that can reach 20 feet in length and is easily recognized by its unusual and distinctive head, which is flattened and extended into a “hammer” shape. A favorite food is spotted eagle rays in the shallows near the island.

The rays, according to divers, will often jump high into the air in an attempt to escape the Great Hammerheads Sharks.

Despite its size, the Great Hammerhead Shark rarely attack humans and is inquisitive with divers.  As a result of being overfished for its large fins (shark fin soup), the species has been assessed as endangered by the International Union for Conservation of Nature (IUCN).

Bimini, located less than 50 miles from the greater Miami-Fort Lauderdale metro area, can be reached in less than 30 minutes by plane.  According to the Bimini Biological Field Station, the Great Hammerhead Shark joins 12 other species of sharks found in the shallow water off Bimini.  These species include Lemon, Caribbean Reef, Tiger, Blacktip, Nurse, Bull, Blacknose,  Atlantic/Caribbean Sharpnose, Mako, Spiny Dogfish and Bigeye Thresher and Smooth Hound.

Earlier this year, the Big Game Club Resort and Marina made international news with the opening of Bimini Bull Run Shark Cage, a first for the global shark diving industry, providing divers and non-divers shark encounters from the safety of specially designed cage systems attached directly to the docks. The system employs a unique ³Hooka¹ air system, allowing non-certified divers to experience the opportunity in addition to those certified divers who would prefer to SCUBA.
The Bahamas, a collection of 700 islands sweeping across 240,000 square miles of territorial waters, is one of the world’s premier shark-watching destinations for divers, reeling in $800 million over the past 20 years for the Bahamian national economy. Sharks in the Bahamas are big business and certainly worth more alive than dead. Globally, sharks are under attack with estimates of up to 90 million harvested annually commercially for their fins, considered a delicacy in certain areas of the world.

From the Lucayan Indian word meaning “two islands”, North and South Bimini along with its smaller cays, is part of the Bahamas.

For generations of angling and diving enthusiasts, Bimini‹less than 48 miles east of South Florida‹ has been and remains the gateway to the Bahamas, a portal to adventure and experience perched at the edge of a sheer underwater cliff and the eastern edge of the mighty and mythical Gulfstream.

Ernest Hemingway was an early apostle to the Bimini experience in the 1930s, where he drank, brawled and wrote his way through several fishing seasons, traveling back and forth between home in Key West and his beloved “Island in the Stream”.

His creative workshop was the Compleat Angler and his characterizations came from a world populated by giant blue marlin, bluefin tuna and schools of sharks almost too large to count.

With his literary acclaim and sporting prowess, Hemingway, together with countless other kindred spirits, established Bimini as the Big Game Fishing Capital of the World‹home today to some 50 world record catches and counting.