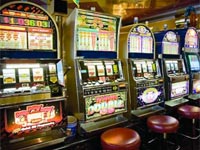 Local hoteliers and tourism officials have been watching Bermuda’s island neighbours in the Caribbean, where major hotel developments have taken place.

In the Bahamas, the $3.5 billion Baha Mar Resort is set to open in December 2014 with 284 residences included in their single-phase resort.

“It won’t be just one hotel property, it will be a number of branded hotel properties. And without the gaming component it’s very unlikely that project would have become a reality,” he said.

Considered to be the only project big enough to overshadow the Atlantis resort, the Baha Mar sits on 1,000 acres of property on New Providence Island’s Cable Beach area.

The Baha Mar Casino is the centrepiece of the development with 1,000 guest rooms and a 100,000-square-foot casino said to rival casinos in Las Vegas.

Partly owned by Harrah’s Entertainment and managed by Starwood Hotels and Resorts Worldwide, the project is billed as “the largest destination resort in the Caribbean”.

It includes a series of Starwood branded hotels including St Regis, Westin and Sheraton.

The hotels involved will have a mix of Colonial, European and African architecture with a total of 3,000 hotel rooms.

The residences fill the three hotels and prices start at $1.5 million, although owners can rent their homes for up to 365 days per year.

Caribbean hotels experienced a second consecutive year of double-digit increases this year, marking the highest growth in profits since 2008.

Although profits are still not back to pre-recession levels, the overall outlook is positive.

As Bermuda prepares for a referendum on gaming, in the Bahamas officials are grappling with the issue of outdated gaming laws.

Chief Compliance Officer at Baha Mar, Uri Clinton, holds the view that “a modern regulatory gaming regime is key in securing a fair share in the international market and allowing operators to compete on a level playing field”.

Mr Clinton is one of the keynote speakers due to address an upcoming Bahamas Tourism Conference on “Shrinking the Global Divide: Synergy, Service and Sustainability”.

Mr Clinton believes regulations that support the oversight of gaming operations that also allow the operator the flexibility to provide gaming products is the way forward.

Prime Minister Perry Christie has already conceded that a revised legislative regime is needed to regulate the country’s casino sector.