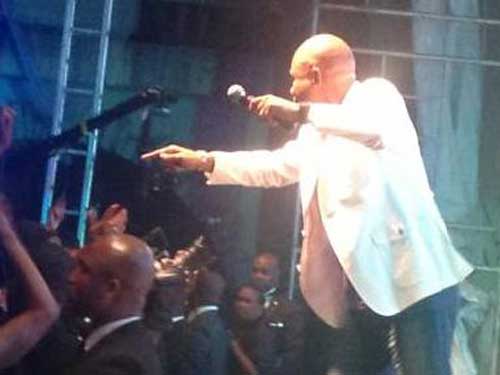 Haiti’s popular musician turned president, Michel Martelly, offered over the weekend a huge performance during a concert to benefit the most vulnerable and also to celebrate the 25th anniversary of his musical band ‘Sweet Micky’, that eventually led him to the Caribbean country’s highest political office.

Before an enthusiastic crowd on Saturday night, Martelly and his group played different rhythms, from his best Haitian Konpa songs to hip hop and R&B hits, such as the Wyclef Jean Creole song Yele, We Are the World and Heal the World from the late king of pop, Michael Jackson.

“It’s been a long time. I am very happy to see you and thank you for coming,” Martelly, aka Sweet Micky, told the crowd that paid US$300 per person to share that rare moment with the one they still consider their favourite.

“Tonight, I left the president at the Palace, now this is Sweet Micky Michele Martalla,” he chanted before the cheering fans.

The crowd went crazy when Sweet Micky started dancing like Michael Jackson on the ‘Beat It’ tune.

“I never thought he could do those moves,” shouted a young fan.

The event took place at the Tara’s hotel, above Petion-Ville, in the Haitian capital’s metropolitan area.

Proceeds from the event will go to the Pink and White Foundation (Fondation Rose Et Blanc, FREB), which was born from a Martelly family movement that has been involved with a great deal of social and humanitarian work in poor neighborhoods and disaster-hit areas during the past 17 years.

During the performance, Martelly greeted several longtime friends and fans he could recognize in the crowd, many of whom supported him when he first started his musical career and when things were very tough for him.

The crowd knew all Martelly’s lyrics they loudly sang along with him all through the night, lit up with spectacular fireworks, to mark the 25th anniversary of Sweet Micky many fans acknowledged they have missed so much.

“I am so happy to be here to see Michel again, this time not as president but as Sweet Micky,” 36-year-old Sarah Guillaume told HCNN as she danced to a Martelly’s song called “Zanmi sa yo” (Those Friends).

“I used to go to almost all of his events in Petion-Ville. Sweet Micky is part of my life because I met the man who is now my husband during one of his performances,” Sarah Guillaume said.

“We have a very happy family now and I am so grateful,” she said.

Many expressed support for the social work the Martelly family has been doing to assist the more vulnerable through the foundation, even before accessing the country’s presidency.

“We could even have paid US$1,000 per person to attend because I know the money is going to help people that really need assistance,” said Cedric Chancy, sitting at a table with his wife, his two daughters and several friends.

That was the first event of the kind held in Haiti by Michel Martelly since he took office in May 2011 and many fans wish there could a few other events of the same kind before the end of his term.

“I love President Martelly who is doing a great job for the country, but believe me I miss Sweet Micky so much,” said 40-year-old Jennifer, hoping for a full comeback of Sweet Micky at the end of Martelly’s term, in 3 years.

Sweet Micky is reputed for having revolutionized the Haitian music industry, which has now become a lucrative business, while, previously to his era, Haitian musicians could barely live on what they use to earn from their professional activities.

Several other artists also performed in the concert many say they will never forget.