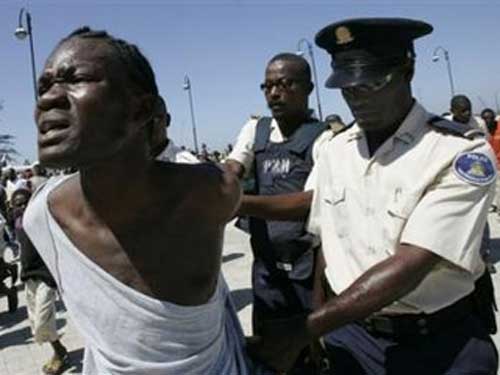 Haitian police officials said that two men were arrested after participating in a violent attack against a British Red Cross Mission chief and his Haitian gay partner, who were organizing an engagement ceremony in the Caribbean country’s capital.

The couple was evacuated by several specialized units of the police.

Police inspector in the Petion-Ville district, Patrick Rosarion, told HCNN a mob in the Bourdon area violently attacked on Saturday night a group of gay individuals who were attending a betrothal ceremony.

“When people in the neighborhood learned about what was going on, they launched an attack against the house with Molotov cocktails and other means,” Rosarion told HCNN.

“The crowd grew rapidly and they wanted to kill those inside,” Rosarion said. “So we had to call for the backup of specialized units to evacuate the people,” he explained.

Two male attackers have been arrested, when they were trying to take away a few things that were inside the house. They are still in police custody.

“The two men, who were arrested, participated in the violence, but they also tried to steal things from the house,” the police inspector told HCNN.

Two cars, belonging to participants, were burned down by the anti-gay mob that also threw rocks at the house. Police official said gunshots were also heard in the area during the clashes.

A police source familiar with the case told HCNN the couple, Simon Ashmore aka Max, from Britain and his Haitian partner Jovani Verneret, were placed under police watch until 3 o’clock Sunday morning before being evacuated.

The mob remained very threatening all through the night and the small group of police officers who first arrived on the scene did not want to take the risk of confronting the angry mob, without the necessary backup, police officials told HCNN.

The ceremony took place at an office of the International Committee of the Red Cross headed by Ashmore. Several Red Cross vehicles were also moved to safer places to avoid them being set ablaze. The Red Cross office building windows were damaged.

All of the evacuees were taken safely to the police precinct in Petion-Ville before being released, since Haitian law is mute about gay activities and status, HCNN has learned.

There were nearly 40 gay individuals attending the ceremony and invitation cards, from Max and Jovani, were sent out to several dozen people in the gay community. HCNN has obtained of copy of the invitation.

Gay rights activists denounced what they call the growing homophobia that is developing in the country.

Charlot Jeudi — who heads Kouraj (Creole word for Courage), a gay rights group in Haiti — called on the authorities to bring the aggressors to justice.

“This is unacceptable that our lives should be so much in danger just because of our sexual orientation,” Jeudi said. “Gay people also have rights. The attackers should be prosecuted and punished,” He stated.

Several protestant Christian groups have organized several street demonstrations against gay activities in the capital Port-au-Prince and in provincial areas.

The Haitian government and police have publicly committed to protect gay people from violence. Several other gay individuals have recently being threatened or attacked.