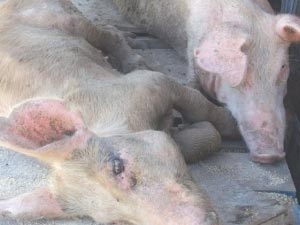 The Humane Society of Grand Bahama (HSGB) is speaking out against the inhumane conditions a of number of livestock at a makeshift farm in East End.

Elizabeth ‘Tip’ Burrows, HSGB managing director, is crying foul on who ever is responsible for having at least nine pigs encaged in what appears to be a construction/dump site in the middle of a pine tree forest.

Even more disturbing is the number of badly malnourished-looking pigs and more than 50 goats roaming wild on the property.

Burrows said a tourist, who had been vacationing out east and exploring a number of the track roads, had called the shelter a couple of weeks ago after stumbling across the site.

The Freeport News visited the site with Burrows Wednesday afternoon and observed as two of the pigs were unable to move or stand up and one of them even appeared dead.

It was realized, however, that the pig was still alive after it wiggled its ear in attempts to relieve itself of the barrage of flies.

“She didn’t know who to call so she called us. I made some inquiries, talked to the Department of Agriculture, they knew whose farm it was and they were going to deal with it,” she said.

After not being able to ascertain what was done by the government agency over the last two weeks, Burrows said she decided to make her way down to the property and see for herself.

“I’m extremely upset. This is horrendous. Even animals that are intended for food need the basics — shade, shelter, food, water and medical care. This is animal cruelty,” she said.

Burrows points out her plight is not only for the pigs, but the goats as well.

“It appears the goats are breeding at an alarming rate. Anyone taking care of 80-plus goats properly is a big expense,” she said, “not to mention the inbreeding that seems to be going on could be a big problem.

“This just doesn’t look like a farm to me.”