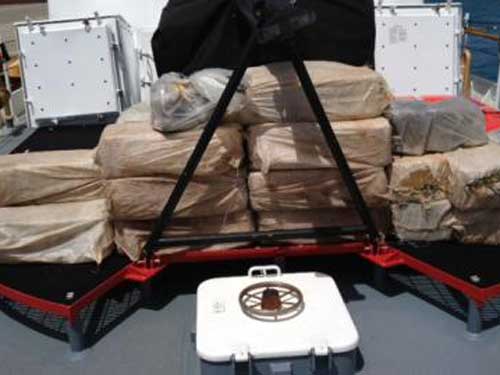 The Coast Guard, British Royal Navy and US law enforcement partners seized 1,500 pounds of cocaine, a go-fast vessel and detained three suspected smugglers, during an at-sea interdiction last Friday in the Caribbean Sea.

The drug shipment is estimated to have a wholesale value of more than $24 million.

“Our collective aggressive efforts involving international, federal and local enforcement authorities continue to yield positive results,” said Rear Adm. Jake Korn, commander of the Coast Guard Seventh District. “We stand united in our unwavering commitment to protect the citizens of Puerto Rico and the US Virgin Islands from the threats that come from the sea by interdicting these major drug shipments as far from shore as possible and bringing those responsible to justice.”

Coast Guard watchstanders at Sector San Juan diverted the Coast Guard Cutter Sapelo to interdict the suspect vessel, while the Royal Navy’s HMS Lancaster frigate, on patrol in the Caribbean Sea with a US Coast Guard Law Enforcement Detachment (LEDET) onboard, also responded upon being alerted.

The Lancaster embarked the detainees and contraband. The crew of the HMS Lancaster transferred the contraband and suspected smugglers to the Sapelo for transport to Puerto Rico.

“These arrests and multi-kilogram seizure are a clear indication of the success of the Caribbean Corridor Strike Force Initiative,” said Rosa Emilia Rodríguez-Vélez, US Attorney for the District of Puerto Rico. “Along with our domestic and international law enforcement partners, we will continue to bring our resources to bear to ensure that drug traffickers and their associates are brought to justice for the damage they inflict on our communities.”

Since September 2012, the Coast Guard has seized 20,500 kilograms of cocaine and 8,500 pounds of marijuana during 22 law enforcement interdictions under Operation Unified Resolve, in partnership with regional law enforcement authorities in the Caribbean, The wholesale value for these seizures is worth more than $690.3 million.

The Coast Guard’s efforts under Operation Unified Resolve contribute to the interagency results being achieved each and every day locally under Operation Caribbean Guard, which coordinates efforts between the Coast Guard, its DHS, Commonwealth and Territorial law enforcement partners, who are working to deter, detect and disrupt illicit maritime trafficking to Puerto Rico and the US Virgin Islands.