Being Lawful and Honest Is ‘Pointless’ 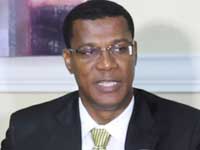 At the eighth sitting of the House of Assembly, Premier Rufus Ewing said he had been raised to be honest and law abiding but added, “In the current socio-economic and political context… these qualities do indeed at times appear to be pointless and are the root causes of frustration because rules are not in our favour.”

In the opening remarks of a ministerial statement that failed to bring any clarity as to his intentions for the immediate and long term of his administration, Ewing said he was “burdened with questions as to whether or not he should carry on.”

Then, in trying to move away from his claim that he will throw away honesty, he claimed that he came to this conclusion because the governor under the current constitution has “uncensored powers”.

While he did not list the decisions made by Governor Ric Todd, who is due to depart the islands within a few days, with which he disagrees, the premier claimed that in general the governor was not acting in the best interest of the people of the TCI.

This has been denied by Todd, who has issued statements celebrating achievements during his term of office that benefit the islands.

The premier then claimed that he and his government were democratically elected. However, in the November election, the Progressive National Party (PNP) lost the district collective and at-large popular vote by 6%. The PNP won only 44% of the vote while the current opposition won 56%. In fact, Ewing himself received fewer votes than the leader of the opposition.

Ewing went on to say, “The government of the people is having some of the most difficult times, being bound by chains and whipped when we try to break free in the interest of the people.”

Ewing claimed that the economy has grown by 3.4%. However, this is a recent forecast just released by the government and has not yet been achieved.

In supporting this claim the premier listed a number of projects that are moving forward. However, none of these projects, including those which are refinanced stalled developments, were brought along by Ewing’s ten-month old administration. It was the interim government and Governor Todd who early last year announced they had 34 projects being proposed for consideration. This followed similar comments by previous Governor Gordon Wetherell.

The premier then reversed his opening discouraging comments, saying, “I am very optimistic that this economy will rebound completely and this growth must be to the betterment of the lives of our people.”

Surprising parliament and the public, Ewing said he will refuse the grant of $15 million from the European Union (EU) if the improved and streamlined business practices recently spoken of by Finance Minister Washington Misick are adopted without what Ewing called “belonger reserve categories.”

The premier then picked up on Misick’s forecast of diversification of the economy, such as “manufacturing, processing, and identifying trading partners for the importation of raw materials to serve these industries.” These trading partners, Ewing said, could be the Dominican Republic, Haiti, The Bahamas and other Caribbean Community (CARICOM) countries in close proximity, as well as the US and Canada.

What Ewing said was that “the diversification of our economies into the manufacturing and processing industry will, in addition to boosting the economy, create jobs and promote Turks and Caicos internationally with goods labeled ‘Made in the Turks and Caicos’; these results all having an overall impact of lowering the cost of goods and cost of living.”

However, Ewing did not specify any of the industries, products or investors he is seeking to set up. He also did not mention how future TCI-based manufacturers could overcome the high import duty his administration has recently increased or the cost of electricity, which is five times that of mainland rates.

Ewing then went on to claim he will bring certain dream projects, including a Caicos islands causeways and a East Caicos “mega port and facility”

“All of these when implemented will bring prosperity for islanders,” he said.

However, a current concern locally is that the taxes put in place by the previous and current PNP administration will have a negative economic impact.

The premier then went on to thank educators and education ministry for their work, as well as private parties now contributing to the educational needs of children unable to afford school supplies. He did not address the shortfall in classroom space.

For the first time since the election ten months ago, the premier called on Britain to pay down the debts created by the previous PNP administration.

Finally, Ewing again chided the outgoing governor for renewing Attorney General Huw Shepheard’s employment contract for an additional three years. This concern had been amplified recently by the takeover by the Crown of the PNP headquarters building, which had never been paid for. The building itself sits on a valuable piece of commercial property on the Airport Road.

The PNP, which occupied the property for years, never obtained a lease or paid any money whatsoever to the government for the land. In fact, during the previous PNP administration they tried to disguise the fact that public funds were charged for the use of the property as constituency offices by local PNP representatives.