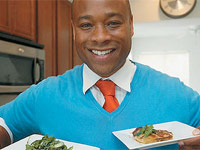 The show titled Reversed, is to be filmed in Jamaica, and will feature seven persons from Jamaica, Trinidad, Puerto Rico and The Bahamas.

The best doctors, nutritionists, herbalists, dieticians, and personal trainers in the islands and states will be utilised by the producers to show the guests how to take back or ‘reverse’ their lives.

According to a website for the show, the programme will span two weeks and will change the face of diabetes and health.

“With diabetes reaching pandemic stage, the people of the Caribbean are being hit hard. With almost one out of three on these islands suffering from diabetes, Mattocks will produce a thrilling and compelling, as well as, entertaining program that will showcase the lives and stories of each person living in the house. This is not a contest, this is real life!” reads the press release.

Mattocks will look to air the TV show in Trinidad, Jamaica, Puerto Rico and The Bahamas to name a few.