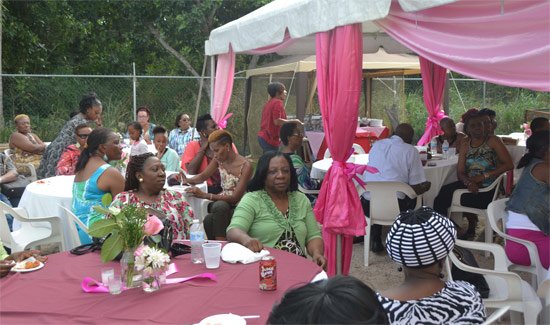 The stories, the food and the music flowed at a cancer support group event Monday which drew scores of survivors together to discuss their journey and share stories of survival.

“To celebrate life amongst other survivors is a blessing,” said Sharine Symonette, a three-year breast cancer survivor and a one year bone and lung survivor who has written a book about her journey.

In Christmas 2013, Ms Symonette cancer came back with a vengeance, at stage 4, distant spread.

“One night, I didn’t know if I would live to see morning. That night I typed out my obituary. Six months ago I did 18 weeks of chemo consecutively and I’m still here today. Many who were diagnosed with me did not make it.

Ms Symonette now has a clean bill of health.

“When we get together it’s to attend someone’s funeral so an event like this is just a blessing,” she said.

Presently, her cancer is in remission, although she receives monthly treatment for nodules in her lungs.

“Our group aims to help with food, utilities and paying for treatment. We want to help cancer patients cope with life during treatment and help survivors with life after treatment.”

She said anecdotal evidence suggests most persons diagnosed with cancer do not have insurance.

“I have a young lady right now who has pain in her port-a-cath in her right side but has not gone to the doctor because she doesn’t have any money,” said Ms Dean. “I’m going to reach out to the doctor on her behalf.”

Well-known amongst cancer support groups and advocate circles, Ms Dean’s contact information gets passed around through an unofficial network of cancer patients whenever someone is in need of a listening ear, words of encouragement, or advice.

“I take all calls,” Ms Dean joked at the event.

“That’s true,” one attendant whispered. “I always call dead late and she answers.”

“It feels good to know you are not alone in your fight for your life and your health,” said Patrice Brice, who is afflicted with fibromyalgia, a disorder characterized by widespread musculoskeletal pain accompanied by fatigue, sleep, memory and mood issues.

“Doctors took a while to find out what was wrong with me. I was bedridden for three months and in so much pain that if someone touched me I would cry.”

Ms Brice is now managing her illness through medication.

“To hear similar stories of strength and survival is uplifting,” said Ms Brice.

Sitting at a nearby table was 15-year breast cancer survivor, Beth Rigby.

The event provided her with the opportunity to make new acquaintances and catch up with old friends.

“I’m here and enjoying myself,” said Ms Rigby with a smile, as she watched some persons take to the floor to dance an impromptu electric slide.

“When I hear the stories of what others went through I feel lucky and blessed. It’s an inspirational day.”

The event was also open to supporters of cancer survivors. Sophia Adderley was one of many who attended.

“When I first learned my sister had cancer I was more dramatic than she was. I acted as if I was sicker than her,” Ms Adderley recalls.

“Through all her sickness she wore it well. I think that’s why she has survived, that positive frame of mind. She wore it better than the whole family.”

Delivering words of comfort and sharing her journey at the celebratory event was Olive Palacious.

In 2005, Ms Palacious was diagnosed with POEMS syndrome, a rare blood disorder that damages nerves and affects other parts of the body.

According to the Mayo Clinic, POEMS syndrome can be misdiagnosed since the signs and symptoms mimic those of other disorders. It progresses rapidly.

“Be aggressive in asking questions. Take your questions with you along with your notes on the symptoms you have experienced,” Ms Palacious advised. “Be on top of your sickness. It’s all about you and you can beat it.”

Following stem cell treatment abroad, Ms Palacious illness has been in remission for seven years. She is currently writing a book about her journey.

Ms Dean’s group meets once a month to plan activities and brainstorm over fund-raising initiatives. She can be reached at Genniedean@hotmail.com

Caption: Cancer survivors and supporters in attendance at the event held on Monday, January 12.
Photo by Precision Media