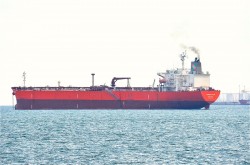 Effort to refloat a Taiwanese tanker off Grand Bahama have failed for the third time.

At approximately 2:30 p.m. on 26 September the Formosa Falcon, a 39,307 dwt vessel, controlled by Formosa Plastics, ran aground off the coast of Grand Bahama.

Reports are that the vessel was altering her position at Freeport anchorage due to her proximity to another vessel. Whilst altering its position, the vessel’s captain reported that westerly winds of 15 knots forced the vessel aground. The vessel is a fuel tanker with 12,796 tons of alkalyte. There is no evidence of emission of this product into the waters and the hull is reported intact, the Bahamas’ Ministry of Transport and Aviation reported.

The ministry has just released news that efforts to refloat the ship continue to be thwarted. A third attempt to refloat the M/T Formosa Falcon by the owners was not successful on Saturday. The salvage team made several efforts to re-float the grounded vessel however, the laden vessel remains grounded under the supervision of a tug vessel.

Booms have been deployed to protect the coast line in the event of an unforeseen incident.