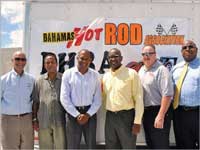 The need for speed will finally be fulfilled, as local race car drivers will get an opportunity to accelerate down a new track, in the coming weeks.

The more than 100 race car drivers in the country, who were worried that the promises of building a new facility would not transpire, welcomed the news yesterday.

The original site which was used by the Bahamas Hot Rod Association (BHRA) was turned into a parking lot for the new Thomas A. Robinson National Stadium.

As a result, the multi-million dollar drag race facility is now located at the southwestern section of the Queen Elizabeth Sports Centre.

A soft opener is set for the Discovery Day Holiday weekend, October 12, announced president of the association Elwood Donaldson during an official tour of the facility yesterday.

“We are planning a soft opening on the Discovery Day Holiday weekend where we will have a weekend of racing,”  Donaldson said.

“We probably won’t have a full-time event until next year but we are working really hard for that.

“We are working with the government and the National Sports Authority (NSA) to ensure that it happens.” 

A sound barrier and fencing around the perimeter will need to be installed by the government, before the electronic timers and other equipment are put in place, according to Donaldson.

The construction of a new concession stand and bathroom facilities, as well as bleachers for fans, are all the association’s responsibility.

The government is responsible for the construction of the facility, the site and other building materials, said Donaldson.

He added: Once the government is finished with their part, we will be completing those items which we feel will take us another three to five months.

“We are working on those very diligently with the NSA, the government and our sponsors.

“From our estimate, the government, I think, would have spent anywhere around three million dollars on their part of it, and we will probably need another half million dollars to complete it.” 

Once completed, the track is expected to receive international certification from the International Hot Rod Association (IHRA).

Frank Kohutek, the southern director for the IHRA, was on hand yesterday to officially announce their association with the BHRA.

Kohutek said: “I was first contacted in 2005 by the BHRA about coming to The Bahamas.

The executives wanted to sanction their facility so they flew me out here and carried me to the drag stripe, which is now the parking lot for the national stadium.

“Even though I could not sanction the facility at the time, I could see the passion that these guys have. It was pretty amazing.

“They brought me back again, and I met with the prime minister. This was before the big stadium was built. I was showed the drawing and what they had planned.

“What seemed like a long time really wasnâ t, because everything is now in place.

“The stadium is beautiful and the race track is really nice. They have done everything that I have asked.

“They have followed the instructions in the letter. I am proud to have them join the organization.” 

The IHRA is the second largest drag racing body, that is sanctioned by the National Hot Rod Association (NHRA).

The body, which was founded in 1970, has certified racing tracks all throughout the United States of America (USA).

They have also certified tracks in Canada, Puerto Rico, Aruba and now The Bahamas.