Plea Not To Give Taino Beach Away 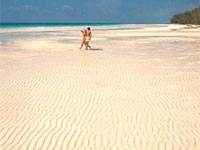 While addressing a crowd of business licensees, including Sir Jack Hayward, Sarah St. George and Ian Rolle, Smith urged the GBPA representatives not to “give away” Taino Beach to developers.

Explaining the reason behind his opposition, Smith stated that the western area of the beach does not belong to the company and there is a serious need for recreational spaces on the island.

“We’ve already desecrated the swamps, the wetlands and the environment in Freeport, thereâ s not much left to say,” Smith said.

It is claimed that the GBPA has plans to use a portion of land on Taino Beach to create a water park.

However, Smith claimed that development in the area has only ruined the beauty of the beach.

“I invite all of you to go back behind Taino Beach on the west side and youâ ll find remnants of what was there 15 years ago,â  he said to the audience at the Pelican Bay Hotel yesterday.

“Half of it was taken away when you all put the Big Red Boat in about 15 years (ago). I will not let you take the rest of the western side of Taino Beach, so don’t think you’re going to put some marine mammal development program there.”

Smith told the GBPA executives that if they truly mean well, they would make strides to clear the beach and restore it to its original beauty.

“Sir Jack Hayward and I, despite our differencesâ ¦ have a clear understanding about the garden city Freeport ought to be. I urge you Jack to look at Taino Beach and just take a real excursion. Donâ t give away Taino Beach to any developer. We need recreation spaces,” Smith said.

An environmental activist and director of Save the Bays, Smith joked that his next environmental campaign would be â Take Taino Back.”

“We want to take Taino back and we want you to lead the charge,” Smith said to the Hayward.

His comments come amid an ongoing land dispute between the GBPA and local residents, who claim the company has wrongfully acquired their land in the Taino Beach area.

According to these residents, no formal documents have been signed to show that the GBPA is the rightful owner of the land, adjacent to the Stoned Crab restaurant, which belonged to their ancestors, but was passed on to them.

GBPA officials, since the beginning of the land dispute, maintain that they are the rightful owners of the land.