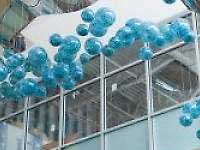 On October 17, the official opening of the final stage of redevelopment at Nassau’s Lynden Pindling International Airport (LPIA) in The Bahamas will take place with fanfare and local celebration fitting the completion of one of the Caribbean’s largest infrastructure projects.

Since July 2009, when ground was first broken on this $410 million project, Nassau’s airport has transformed into a place of pride for Bahamians and a welcoming facility for the more than three million passengers who pass through the airport annually.

The Nassau Airport Development Company (NAD), a Bahamian company owned by the Government of The Bahamas and operated by Vantage Airport Group, set out to build a world-class airport to align with the expanding tourism industry on the islands. It has accomplished this major feat on time and on budget, while contributing significantly to the local economy through the use of local contractors and labor.

While more than 74 percent of the workers on this project were Bahamian, Canadian companies have also benefited from the involvement of Vantage Airport Group. Architectural and construction firms with headquarters in British Columbia contributed to the design and build of more than 600,000 square feet of new terminal space and an additional one million square feet of aircraft operating surface.

“We have gone from an airport that did not at all reflect the beauty and warmth of The Bahamas, to a facility that reflects a Bahamian sense of place,” Vernice Walkine, president and chief executive officer of NAD told The HUB during this year’s World Routes forum in Las Vegas. “As a people, we can now be proud of offering a beautiful, efficient, sustainable and welcoming first and last impression to visitors to our islands.”

With the completion of the third and final stage, which includes the redevelopment of the domestic and international departures terminal and the domestic arrivals terminal, the airport will have increased in size by 24 percent and will be capable of accommodating 50 percent more passengers (over 5 million). A total of 10 aircraft bridges and 30 aircraft ground loading positions mean increased capacity and better passenger and airline handling.