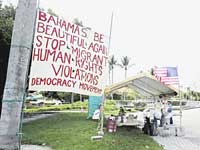 Speaking to The Tribune, Mr Sanchez said the Democracy Movement was willing to hand over to the government the contact information and whereabouts of all the witnesses and alleged abuse victims so their testimonies could be submitted as evidence.

A panel at the RBDF, Coral Harbour base was expected to begin a summary trial yesterday at 9am.

He further called on the government to make the proceedings public due to the mass of interest the matter has drawn, both locally and in the US.

Mr Sanchez said: “It would be advisable to the government to make these proceedings public after all these months and months of delay and conjecture by the government.”

“If they conclude a secret hearing and those men are exonerated there will always be questions of the Bahamas government.

“We continue to ask the Bahamas government and its officials to contact the victims and to work hard to include their testimonies in trials. What kind of trial would it be if that information is not included?

“Officials in the Bahamas have either repatriated or sent the witnesses and abused victims to Cuba, Panama, or else where but their testimonies can still be added and we ask them to ensure that they are.”

He further responded through a press statement to the recent announcement that the Caribbean community supports the Bahamas in the long standing standoff with the Democracy Movement. CARICOM recently condemned threats of an economic boycott and the steps taken by the group to influence economic prospects in Florida.

In addition, Mr Sanchez wants CARICOM officials to serve as mediators as the trial continues. He said the Democracy Movement doubted that the Bahamas had the necessary resources to handle the situation.

“It is inconceivable then that CARICOM has put out a public statement presumably referring to the human rights advocacy efforts being led by the Democracy Movement, but makes no reference at all to the tortures of undocumented migrants detained at Carmichael Road Detention Centre which triggered the protests .

“The questions are, has CARICOM taken the time to investigate the tortures that the guards at the Carmichael Road Detention Centre under the watch of the Minister of Foreign Affairs Fred Mitchell against Haitian, Cuban, and detainees from other nationalities?