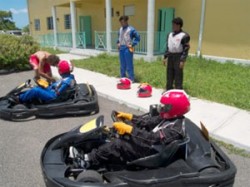 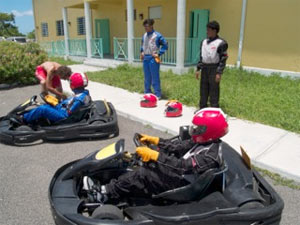 They will be sharing the track with the British Historic Karters so a great mix of youth and maturity – not to be missed.  Spectators are invited and entry is free.

In their Press Release, the British Historic Kart Club said they are delighted to be involved in the third year of the  Bahamas Speed Week Revival following on the very successful debut of Karting in 2012 in the Bahamas when the UK Formula Kart Stars participated.

Fast cars and the original Speed Week are part of the Bahamas history going back to the late 1950s.  Less well-known is the fact that Karting on the island is also part of that heritage. Karts appeared on the island soon after the sport started and the Bahamas hosted the first World Championship in 1959 which,  unfortunately, was never held here again.

To re-ignite this Karting heritage as a viable sport and educational tool for future generations, David McLaughlin, the CEO and Event Organiser of Speed Week and Managing Director of Karting Bahamas gave students from four government schools the opportunity of a lifetime when he and his partner in Karting Bahamas, Victoria Sarne, initiated ‘Edukarting’ as a pilot Summer Camp programme at Doris Johnson Senior High. It was so successful that the four participating schools are continuing the programme as an after school Club and it is hoped eventually to expand it further to include other government schools.

The Historic Karters are volunteering  the chance for these students to work with them during Speed Week and learn about the heritage of Karting as they take part in the vintage events.  “The plan is to buddy up students and owner drivers enabling us to teach them as they gain hands-on experience.’ It will be a unique opportunity as many of karts such as a 1962 twin Komet engine Ital Record, a 1964 Tecno Parilla or the very first Class 4 Zip Villiers kart are very rare or ground-breaking in design.