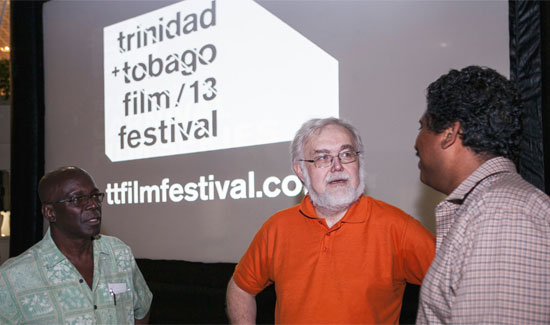 These free presentations, part of the film festival’s Carnival Film Series, take place at San Fernando Hill and the NALIS Amphitheatre at the National Library in Port of Spain, this Friday and Sunday, respectively. Both events begin at 7pm.

In the following short interview Funk outlines some of the treasures audiences are in store for.

trinidad+tobago film festival: Welcome back to T&T—as ever, we’re happy you’re here. Last year was your first doing a presentation at our Carnival Film Series. How do you think it went?

Ray Funk: I had a great time and was very pleased that over three hundred people came to the presentation at NALIS. I feel privileged to bring back to Trinidad film and television clips that reflect Carnival culture, calypso, pan and mas. Part of my mission in researching and writing about Carnival arts is to return Trinidad’s cultural heritage to Trinidad by bringing back things that end up outside.

I am constantly on the lookout for early film and television clips and when I was asked [by the ttff] to present a show I had accumulated a number of rare pieces that had not been seen before. Last year I was especially excited to show people clips from a 1961 Italian film, America by Night, that featured the first feature-film appearance by the Mighty Sparrow, and I was able to show him and his wife a copy of it and give it to them. I also showed a limbo clip with Bill Trotman and he appeared at the event, even though it was his birthday and there was a party at his house. The audience gave him a nice round of applause.

ttff: And what do you have planned this time?

RF: This year I have put together a programme of rare material that I think every one will enjoy and that offers a lot of variety. It comprises calypso pieces that have never been seen, including a piece that I just found and got transferred from 16mm film. It’s a 1956 TV show that features [the calypsonian] Sir Lancelot doing an extempo on Groucho Marx! It arrived in Alaska only a few weeks ago and thankfully a pan-playing friend at the state film archive got it digitized for me.

I was in regular touch with Sir Lancelot before he died, visiting him in California, corresponding and calling him. I have spent almost 20 years researching his career but had never known he did this TV show. I have shown clips from many of his movies over the years, but it will be great to show this clip and I have invited the extended Pinard family here in Trinidad to come see it.

ttff: That’s not the only extempo clip you’re showing, right?

RF: That’s right.  I will also present the world premiere of a short documentary film done several years ago on extempo. It features current extempo monarch Lady Africa and others like Black Sage and Lingo, in an encounter at the Mas Camp Pub. To my knowledge this is the first documentary ever done [solely] on the art of extempo. It was made by Steve Zeitlin and Amanda Dargin from New York, preeminent folklorists. This documentary is part of ongoing research on poetry duels in many cultures. They have filmed events in Brazil, Portugal as well as New York and are off in April to look at poetry duels in Italy.

ttff: What other calypso clips will you present?

RF: Well, I am excited to show for the first time in Trinidad a Lord Kitchener music video from 1951 that no one here has seen. In part that is because it is something I commissioned. I worked in 2012 on a tribute to Kitch with the Association of British Calypsonians and this film grew out of that. Kitch sang a song about a boxing match where Randolph Turpin, a boxer of Guyanese heritage, beat the great Sugar Ray Robinson. I managed to get the footage of the match and a friend created a great edited film clip of the song and the match. It’s like watching a music video from 1951!

Going back even further there are some short films for special nightclub jukeboxes in the 1940s called “soundies” which feature the great Sam Manning. One clip features dancing from Beryl McBurnie, when she was the toast of Harlem in 1941—she does a strange dance to Atilla’s “Roosevelt Came to Trinidad”. Another clip has the nightclub singer Grace Barrie doing Houdini’s “Stone Cold Dead in the Market”, which had become a hit in a recording by Louis Jordan and Ella Fitzgerald.

I have a special interest in the “calypso craze” of 1957. This was a period when for six months the American entertainment industry thought calypso would kill rock n’ roll.  I have two “craze” clips—a Pat Boone calypso song and a piece by the pop-poet Rod McKuen, singing a song called “Calypso Rock”. There were three feature films done [on calypso] and I feature two clips from Calypso Joe, the rarest of the three: a song by Lord Flea about the “Naughty Little Flea”, a Jamaican song that seems inspired by Spoiler’s “Bed Bug”, and the American folk group the Easy Riders’ take on Roaring Lion’s “Mary Ann”. Later this year Bear Family Records in Germany will issue a six-CD, one-DVD set with a massive coffee table book that Michael Eldridge and I have been working on for a long time on this fascinating period that shaped worldwide perceptions of calypso music.

I also have a late 1960s song by the sadly little-known calypsonian Young Killer, from a tourist film with Trinidad Carnival footage. And another rare piece is the late great folk singer Pete Seeger singing Tiger’s classic “Money is King”. Seeger had a serious interest in Trinidad culture—he made the first film short on pan in the 50s, sponsored Kim Loy Wong to come to the US, and wrote articles and a manual on pan. But he also was interested in calypso and appears to have helped get Tiger to the Newport Folk Festival. This is a song he performed and his grandson Tao Rodriguez Seeger continues to perform.

ttff: Speaking of pan, will there be any pan clips?

RF: I have a number of clips of pan that show a wide arc of pan’s history and answer the question of how far pan reached. The earliest is a brief clip from 1952 of the Brute Force steelband of Antigua. They were one of the first steelbands from outside of Trinidad to develop a worldwide reputation, and started touring outside of Antigua. Then there are clips of pan in Carnival from the 60s and 70s from various documentaries that give a chance to see pan at Carnival on the streets. For those who have been following the ongoing series of articles that Andy Martin and I have done in the local papers on pan worldwide, I have a couple short pieces that show heavy metal on pan and an avant-garde duet for pan and cello.

RF: I have rare clips of mas from 1948 to the 60s and early 70s, showing the richness of mas in eras past in footage that has been gathered from various sources. There is more but I want there to be some surprises!

The Carnival Film Series is sponsored by the Trinidad and Tobago Film Company and the National Carnival Commission. Technical Support is provided by North Eleven, the ttff’s media and projection partner. For more information visit ttfilmfestival.com.