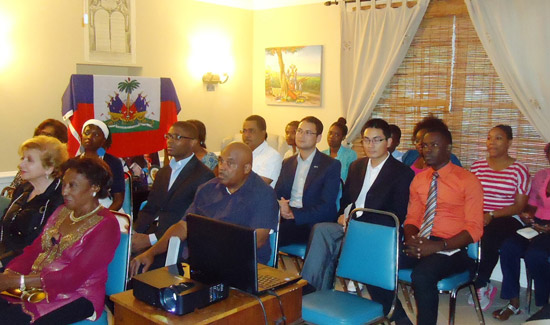 Alliance Francaise in association with the Embassy of Haiti, the Honorary Consulate of Monaco, the Institut Francaise and College of the Bahamas intellectuals make the Semaine de La Francophonie (French speaking Countries Week) a Success in diffusing French and Francophone Cultures in The Bahamas.

The Alliance Française des Bahamas held a series of events and activities for the week of the Francophonie (March 17 -21, 2014. All events were free of charge to the public.

It invited the different countries in the French speaking world present in The Bahamas to participate in the events in order to have a wider range of activities for the Bahamian public.

Persons attending the events during the week had the opportunity to listen to a number of lecturers and presenters on a variety of subjects including the Quiet Revoltion in Quebec, Canada by Dr. Irene Moss; a presentation and film on the birth of Casino and gaming in Monte Carlo by Koren Debi Williams, Honorary Consul for Monaco; an accordion camp in French on Cat Island by Diana Hamilton; a tribute to Aimé Césaire, un Grand homme in French literature by Dr. Keithly Woolward from the College of The Bahamas; the role of Haiti in the Francophonie by Wallenson Norbert, First Secretary at the Embassy of Haiti; a cocktail reception with Haitian food offered by His Excellency Antonio Rodrigue and the Embassy of Haiti held in the gardens at the Alliance Française; an evening of poetry with Antoine Ferrier and les Fables à la Fontaine courtesy of the Institut Français.

Alliance Française Director, Italia Watkins-Jan also showed a short film to students of French at H.O. Nash Junior High School emphasizing the importance of learning another language. The short film from the “Lettres de Louisiane”, a part of the Lettres de Francophonie was produced with the participation of the French Ministry of Foreign Affairs, The French Consulate in New Orleans and the University of Rouen, France.

The Alliance would like to thank all those who made this week possible, especially His Excellency Antonio Rodrigue and the diplomats and staff at the Embassy for the lovely reception and food, Dr. Irene Moss, Dr. Keithly Woolward, Debi Williams, Honorary Consul for Monaco, Diana Hamilton, Wallenson Norbert, First Secretary at the Embassy of Haiti, Antoine Ferrier, Cherelle Cartwright for manning the door and being wherever needed, Burns House & Barton and Guestier for the French wines, Wilson G. Brutus, Ministre Conseiller for being the official photographer of the events,The local Press  and above all, the Société Générale Private Banking for their continued support. A special thanks to the public, students from the College of the Bahamas, the Diplomatic and Consular Corps (thanks Robert, Michèle, Grégoire, Jean and Wallenson for coming EVERY night). Thanks to Madam President, Felicia Mott for the cheese and grapes! And if we have forgotten anybody…we thank you too.

Please visit our website www.afbahamas.org/ for details on all the events and to view the photos courtesy of Wilson G. Brutus & Italia Watkins-Jan.

The Alliance Francaise des Bahamas is a non-profit organization that promotes French language and Francophone cultures in The Bahamas. If you would like to participate or become a member, please do not hesitate to contact us.