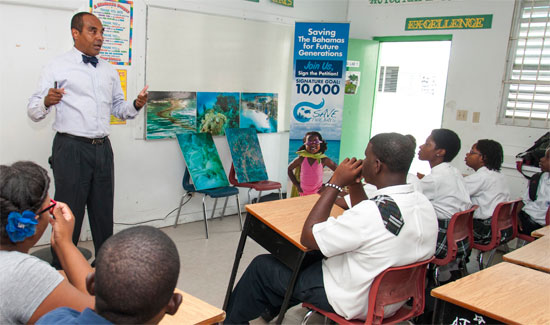 The fight to protect the environment from the scourge of unregulated development is ultimately a struggle to defend the rights of each and every Bahamian, a top environmental attorney told C.V. Bethel students.

Romi Ferreira told members of the school’s Young Marine Explorers club that while the lack of environmental protection laws is an obvious cause for concern ecologically speaking, it is also a question of social justice.

“We are being pushed inland,” he said. “Bahamians are being denied access to their own shoreline.

“Once the coast is developed, you can’t go there unless you can pay. The average Bahamian can’t afford the two or three million it costs to live on the water.”

Ferreira, a director of the fast-growing advocacy group Save The Bays, said this phenomenon is being driven by unregulated development.

“It is cheaper and easier to build resorts and gated communities without an Environmental Protection Act, without a Freedom of Information Act allowing us to find out what is being done in secret,” he said.

“But only certain people will be able to afford to enjoy the results. Meanwhile, at some point, our ecosystems will be destroyed beyond their capacity to regenerate.

“This is what Save The Bays is really trying to prevent. You ought to be able to enjoy your country’s natural beauty when you are old.

“You deserve the chance to show it to your grandchildren. You are the future – this is your fight,” he told the students.

Save The Bays is currently celebrating its first anniversary and the fact that in so short a time, it has managed to attract more than 500 full members and nearly 14,000 followers on Facebook.

A Save The Bays petition calling for a Freedom of Information Act, an Environmental Protection Act and an end to unregulated development has garnered nearly 6,000 signatures. It is available at www.savethebays.bs.

The group’s new radio talk show – ‘Voice of the Bays: The Environment Speaks’ – airs every Monday at 5pm on Love 97 FM.

Caption: THE GOOD FIGHT – Environmental attorney Romi Ferreira tells C.V. Bethel students that the fight to preserve the country’s natural heritage is also a struggle to protect the rights of every Bahamian. (Photo by Derek Smith Jr. for DPA)