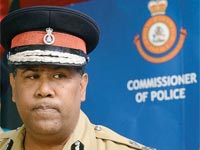 The police commissioner has recommended that charges be brought against the high ranking police officer who authorised the now infamous “jailhouse wedding” earlier this month which turned out to be a public relations nightmare for the Royal Bahamas Police Force (RBPF).

And, apparently, that is all the Police Commissioner cares about… public relations.

See, in The Bahamas, you don’t really ever have to do anything you say you’ll do.  All you have to do is issue a “press release” and then the ignorant masses forget about whatever it was that was supposed to happen.

Remember how the Bank of The Bahamas was going to sue the PUNCH for reporting that the bank was in financial trouble.  Turns out the bank IS in financial trouble and the bank’s boss, Paul McWeeney, was nothing but a liar when he said he’d sue.  It was nothing but a PR stunt to make people think the bank’s finances were all good.  Most Bahamians, at least those with the “D+” average, only heard the weener’s threat to sue, they never actually checked to see if the bank carries through with the threat.

Our politicians use this tactic to hide “inconvenient truths”.

Well, it seems Commissioner Greenslade is using the same tired but effective tactic.

We all know that the corrupt and disobedient cop who authorized the wedding in the police station will never be punished.  But it sure sounds good when the Commish rants and raves about how he’s going to lay down the law.

What Mr Greenslade doesn’t realize is, all this huffing and puffing – with no action, only chips away at his credibility and makes him a laughing stock.

We all know that a certain politician approved the wedding and Mr Greenslade, despite being assured of his job (because he can not be fired) will never usurp a politician.

BTW – how did the criminals who were caught with 50 lbs of drugs and counterfeit U.S. bills ever get bail?