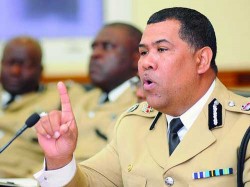 The Whistleblower is struggling to make heads or tails of the PLP’s relationship with and treatment of Police Commissioner Ellison Greenslade in recent times.

At the time of the debate in the House of Assembly, National Security Minister Dr. Bernard Nottage said the bill passed by the FNM gave the PM too much power over the commissioner, which would effect his ability to carry out his duties. This point was rehashed repeatedly by the PLP on the campaign trail.

The PLP also took issue with Greenslade being sent off to Canada to train for approximately a year while Reginald Ferguson manned the top post on the force. Ferguson is a close relative of former FNM senator and chairman, Johnley Ferguson. Ferguson served as acting police commissioner between November 21, 2007 and March 16, 2009. On the latter date, he was appointed to the substantive post of police commissioner and served till his retirement on January 4, 2010.

The PLP gave the impression that Greenslade was sent abroad in order to make way for Ferguson, a reported FNM, to assume the top post. Listening to the PLP, one would have thought that the FNM was being mean to Greenslade, and had treated him with condescension. This bit of propaganda worked like a charm. Many police officers shallowed it hook, line and sinker. If 70 percent of the police force did not vote PLP, then the PLP didn’t get a single vote from that organization.00

Many police officers have a short memory. They have forgotten that under Pindling, police constables were carrying home a pittance of a wage. When Hubert Ingraham became PM in August 1992, constables were making about $1,000 a month. The FNM increased that amount several times. Today, constables are making close to $2,000. Small wonder, then, why many children of PLP cronies are banging on the door to get into that organization.

In light of the amendment to the Police Force Act, the Whistleblower really thought that Greenslade and the PLP were two peas in a pod. Either he was mistaken or the two have had a falling out. The observations of the Whistleblower are based on the ongoing brouhaha on the wedding at Central Police Station. In defiance of the direct orders of Greenslade, an assistant superintendent and three junior officers allowed a jailed suspect to wed his fiancee.

It has been suggested that a senior government official gave the officers permission to allow the wedding ceremony. If these allegations are true, it would mean the have effectively hamstrung, embarrassed and humiliated Greenslade. His post has plenty bark, but very little bite, thanks to the PLP.

The Whistleblower believes that the PLP is intentionally making Greenslade look like a weak and inept police chief, in order to make way for Assistant Commissioner Stephen Seymour, a PLP and close friend of PM Perry Christie. The police officers who voted PLP are probably now regretting their decision to vote for that party, especially considering how shabbily the PLP treated the Police Staff Association and their police chief. If Greenslade threw his support behind the PLP, he too is probably regretting his decision. Whatever is going on in his mind, he must surely now realize that the FNM treated him far better than this government. I hope he has learnt his lesson.