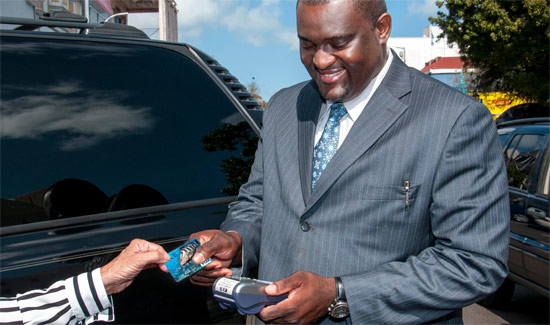 An award-winning Bahamian bank has launched what is already proving to be a boost for small business – a mobile credit card machine allowing customers to pay with plastic anywhere, anytime.

BOB recently introduced the hand-held chip-enabled mobile Verifone, providing taxi, limo and livery drivers with the point of sale terminal prior to introducing it to a broader audience.

“We introduced the Verifone 520 in late December and have already had reports from taxi and livery drivers that they have not only experienced an increase in revenue as a result because people are extending rides or tours, but they personally feel safer because they are operating in a cashless environment,” explained Leonardo Thompson, BOB Assistant Manager, Merchant Services.

One of those drivers, Kenly Charite of SUV Transport, said the cashless payment process has raised his business to a new level.

“It has been a real plus,” said Charite,. “It’s especially important for business and corporate clientele who send their representatives and managers to The Bahamas and now they can get a proper printed receipt for their expenses so I am getting more financial clients because of this. It’s really uplifted my business. I can’t even begin to tell you what a difference it’s made, including new contracts for services.”

Charite, who owns several livery vehicles and employs more during conferences or other busy times, said the point of sale terminals have also been helpful to families running short of cash and grateful for the ability to pay by credit card.

“Often, they come on vacation with a certain amount of cash and they spend more than they planned so they are relieved to know they can still get transportation using a credit card. It makes life easier for the guest and better for us as a transportation company.”

The terminals, which were selected because of the high level of anti-fraud protection, are equipped to take Visa, MasterCard, American Express and Discover.

“We reviewed all the options,” said Thompson, “and went with the Verifone 520, because it is chip-enabled, making it the safest on the market. This is the way the US, which had been using the European system, is going. Chip-enabled is the way of the future for protection.” The mobile terminal provides additional comfort to the customer by its proximity, Thompson said. The card is always visible, within grasp and view, rather than being taken by a merchant to a back office or more distant terminal. And business and payee can both check transactions online.

The bank plans to broaden what it is promoting as ‘transactions made simple’ in coming weeks.

“We envision it helping all sorts of small businesses or those who move around a lot – straw vendors, mechanics, people at markets, plumbers,” said Thompson. “They can present a bill and have it settled right there on the spot.”

Founded in 1988, BOB operates 13 branches throughout The Bahamas and has been recognized eight times as the country’s best bank by international authorities. A report, prepared for internal review as part of BOB’s reflection on its 25th anniversary, demonstrated that the government, which owns 51% of the shares of the publicly-traded institution, has earned an average annual rate of return of 24%, including increases in equity and rights offerings, for the period 1989 to 2013. Some 4,000 individual and institutional shareholders hold the other 49%.