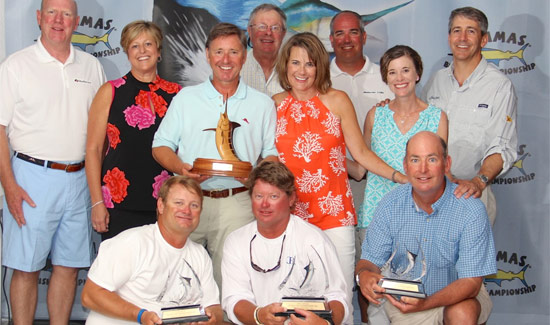 Anglers Greg Smith and Dan Stacy had a great three days of fishing for Team Blue Sky to win the Guana Cay Championship. The 56’ Viking from Pawley’s Island, South Carolina released three blue marlin, one white marlin and one sailfish to clinch victory in the first leg of the 2014 Bahamas Billfish Championship series. Team Blue Sky released fish each day to earn a total of 2100 points and put them in the lead for the 2014 Bahamas Billfish Championship.

Anglers Bob Jacobson and Austin Burr guided Team Marlin Darlin to a second place finish with two blue marlin and three white marlin releases. The 62’ Spencer from Clearwater, FL released their first blue on day one, a white marlin on day two and on day three finished up strong with a blue marlin and two white marlin released. It was an exciting final few hours to the tournament as Team Blue Sky and Team Marlin Darlin traded the top spot throughout the afternoon.

Tournament sponsors Hatteras and MarineMax teamed up to fish the 63’ Hatteras Hatterascal . Angler Ken Reda released a white marlin the first day and a blue marlin and sailfish on the third day, putting them in third place overall. Aboard the Hatterascal, John Ward, President of Hatteras Yachts, watched his team have an excellent three days of fishing and was pleased with their third place finish!

Hatteras and MarineMax were the co-hosting sponsors of the BBC’s season opener at Guana Cay. The companies’ sponsorship included a special participants ‘Pig Roast’ dinner on Thursday evening at Nipper’s. Other social functions during the tournament were hosted by CAT Marine Power, Ocean Club at Port Canaveral and ZF Marine.

The next leg of the 2014 BBC series will take place May 21st-24th on Green Turtle Cay, co- hosted by local resorts Green Turtle Club and Bluff House. Spaces are still available for teams interested in fishing this leg of the series.

For the very latest tournament information, results, and overall standings or to register for any of the remaining tournaments, visit our website at www.bahamasbillfish.com. Be sure to Follow us on Facebook (Bahamas Billfish Championship) or now on Twitter @bahamasbillfish. View tournament photos at SportfishPictures.com. You can also download the BBC App for your Android or Apple device. To contact the Bahamas Billfish Championship call 866-920-5577