Consistency Pays Off for Torta at Green Turtle 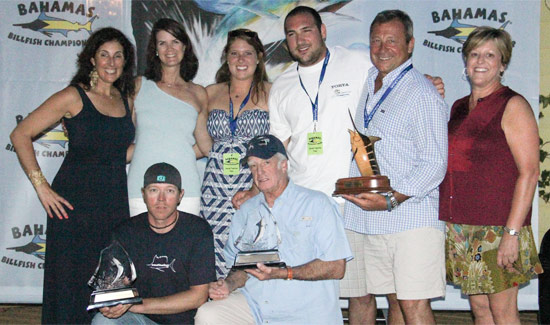 No one enjoyed the first ever Bahamas Billfish Championship tournament at Green Turtle Cay more than Joe Possillico, owner of the winning boat Torta. Joe had a great three days of fishing for Team Torta. The 61’ Viking from Farmingdale, New York released three blue marlin, one white marlin and a sailfish to clinch victory in the second leg of the 2014 Bahamas Billfish Championship. Team Torta released fish each day of the tournament to earn a total of 2100 points.

Angler Bill Gardner guided Team The Boomer to a second place finish with three blue marlin releases. The 76’ Whiticar from Hartford, Wisconsin released two blue marlin on day two and on day three released their third blue marlin. As is usually the case, it was an exciting final few hours of the tournament as Torta and The Boomer traded the top two spots throughout the afternoon.

Team Hooker, led by team captain Kenneth Cummins, had an exciting first day. Three separate anglers released two blue marlin and a white marlin putting Hooker in third place. The team, from Bradenton, Florida, was even more excited as all three anglers had never released a marlin before.

All of the Bahamas Billfish Championship teams received a warm welcome from co-host resorts Bluff House and Green Turtle Club on beautiful Green Turtle Cay. The BBC went to Green Turtle Cay this year after the channel to White Sound was dredged to accommodate the BBC’s sportfish fleet. Everyone that participated was certainly happy! Both resorts rolled out the red carpet with first class hospitality and fabulous food.

The Green Turtle Cay Championship, co-hosted by Bluff House Resort and Marina and Green Turtle Club, produced 14 blue marlin, 7 white marlin and 4 sailfish. All billfish were released. All catches in Bahamas Billfish Championship tournaments are validated using time and date stamped digital images. Affidavits signed by all participants fishing on each team further confirms that the fish was released in accordance with IGFA and Bahamas Billfish Championship rules.

The big news from this tournament is the Blue Marlin are here in Abaco! Every boat fishing the tournament reported bites and seeing large blue marlin on the fishing grounds. This has everyone excited for the final two legs of the 2014 Championship.

At present, the lead for the 2014 Championship belongs to Team Torta with 2900 points, Blue Sky is second with 2400 points and Marlin Darlin is third, also with 2400 points. An interesting note – Torta and Blue Sky are moving back to the States. Therefore, the 2014 BBC is wide open! Everyone has a chance for the Championship ring.

The next leg of the 2014 BBC series will take place June 4th – 8th at Treasure Cay Resort & Marina. Spaces are still available for teams interested in fishing this leg of the series.

For the very latest tournament information, results, and overall standings or to register for any of the remaining tournaments, visit our website at www.bahamasbillfish.com. Be sure to follow us on Facebook (Bahamas Billfish Championship) or now on Twitter @bahamasbillfish. View tournament photos at SportfishPictures.com. You can also download the BBC App for your Android or Apple device. To contact the Bahamas Billfish Championship call 866-920-5577