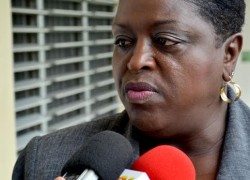 Minister of Social Services Melanie Griffin is sounding an alarm over the appalling number of child abuse cases in The Bahamas.

Police statistics indicate that over a 13-year period, 2,746 children under the age of 16-years have been molested.

“For several years now, we’ve been experiencing reported figures of child abuse, which is inclusive of sexual abuse, anywhere between 550 to 600 per year.  And when you look at the fact that those are just the reported figures the formula is to really multiply it by three, it’s an unbelievable and an incredible amount of children being abused every year.”

But it s not surprising.  The Bahamas is a country that almost rewards child molestation.

In one case, a sick and perverted pastor, who raped a teen-age girl was put in jail for a measly couple of years.  When he was released, he started a new church and hundreds of Bahamian perverts flocked to the church as if nothing had ever happened.

Not only should the sick, perverted, religions hypocrite still be in jail, but that he would be allowed to pastor another church is a damning indictment of Bahamian society.

During a recent press conference to announce a new public awareness campaign against child abuse, Crisis Centre Director Dr. Sandra Dean Patterson revealed that 45 per cent of sexually active girls admitted they were forced into having sex and that teenage girls are the fastest growing group in the population to develop Human Immune Virus (HIV).

Hundreds of teachers, pastors, politicians and prominent businessmen are guilty of child abuse, yet they remain in positions of power.