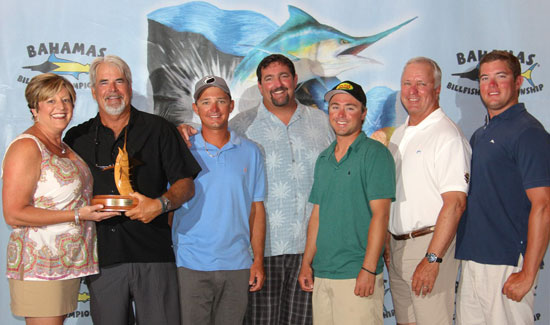 Team Wave Paver, led by team captain Jr. Davis, added their points by releasing a Blue Marlin each day. Consistency was the key for the Kissimmee, Florida team as it earned them the third place finish.

The Treasure Cay Championship, hosted by Treasure Cay Resort & Marina, produced 17 blue marlin, 3 white marlin and 4 sailfish. All billfish were released. All catches in Bahamas Billfish Championship tournaments are validated using time and date stamped digital images. Affidavits signed by all participants fishing on each team further confirms that the fish was released in accordance with IGFA and Bahamas Billfish Championship rules.

The Blue Marlin are here in Abaco! Every boat fishing the tournament reported bites and seeing large blue marlin on the fishing grounds. This has everyone excited for the final leg of the 2014 Championship in Marsh Harbour June 18th – 22nd at Abaco Beach Resort & Boat Harbour Marina.

At present, the lead for the 2014 Championship belongs to Team Marlin Darlin with 5200 points, Wave Paver is second with 3200 points and team Torta is third with 2900 points. Teams Marlin Darlin and Torta are not fishing the last leg. Therefore, the 2014 BBC is wide open! Everyone has a chance for the Championship ring.

For the very latest tournament information, results, and overall standings or to register for any of the remaining tournaments, visit our website at www.bahamasbillfish.com. Be sure to follow us on Facebook (Bahamas Billfish Championship) or now on Twitter  at bahamasbillfish. View tournament photos at SportfishPictures.com. You can also download the BBC App for your Android or Apple device. To contact the Bahamas Billfish Championship call 866-920-5577